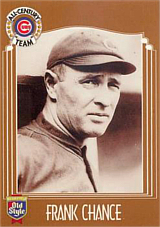 "Who ever heard of the Cubs losing a game they had to have?" - Frank Chance, with a question that would become easier to answer as years went by 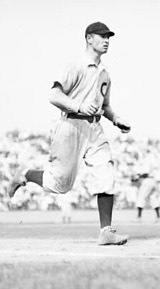 Frank Chance was the most successful manager in the history of the Chicago Cubs, guiding the team to four National League pennants and two World Series titles as part of their lone dynasty. He attained his greatest fame as their first baseman, immortalized in the famous "Tinker to Evers to Chance" infield.

A native of California, Chance attended the University of California and planned to become a dentist before embarking on a baseball career. He joined the Chicago Orphans (later known as the Cubs) in 1898 but saw relatively little action, primarily as a backup catcher, during his first five seasons with the team. A few breaks, both literally (finger injuries sapping his playing time) and figuratively (Bill Hanlon leaving the club without a first baseman) allowed him to become the club's regular first baseman in 1903. His bat was up to the challenge, hitting .327/.439/.440 with 81 RBI and a National League-leading 67 stolen bases. In 1905, he hit .316, led the NL with a .450 on-base percentage, slugged .434 with 92 runs scored and was named the Cubs' manager in mid-season.

Chance continued to shine in his new dual role. He hit .319/.419/.430 in 1906, leading the league with 103 runs scored and 57 stolen bases, and guided the Cubs to their first NL pennant (falling to the crosstown "Hitless Wonders" Chicago White Sox in the World Series). His average dipped below .300 in the next two seasons, but his team went on to win the World Series in both those years. Their NL pennant and subsequent championship in 1908 was obtained in a bitterly contested, down to the wire battle with the New York Giants, with the bad luck and misfortune of Fred Merkle staking the Cubs to their final title for 108 years. By 1909, Frank was no longer a regular on the field, but he once again led the Cubs to the NL pennant in 1910. "The Peerless Leader", as he was known, remained the Chicago skipper through 1912, when disagreements with owner Charles Murphy led the team to part ways with him.

Chance moved on to the New York Yankees as a player-manager in 1913 but posted a 117-168 record in just under two seasons. After a stint as manager of the Los Angeles Angels of the Pacific Coast League, he was skipper of the Boston Red Sox in 1923, leading the club to a last-place finish. He was named the Chicago White Sox manager for the 1924 season but developed a severe bout of pneumonia before he could take the helm. He submitted his resignation to owner Charles Comiskey, but Comiskey refused to accept it, giving him the opportunity to return when his health improved. That never happened. Frank underwent emergency surgery in April and passed away that September at age 47. He was the first of the famed "Tinker to Evers to Chance" trio to die.

Chance had one of the shortest playing careers of any Hall of Famer. He appeared in 17 seasons, although he played 100 games in a season only 6 times. He was quite prominent, partly because the Cubs of his time were a truly great team, partly because of the poem by Franklin Adams, and partly because of his role in the Merkle Bonehead Play. His Adjusted OPS was 135, which puts him tied for 114th on the all-time list (as of 2020), along with fellow HOFers George Brett and Frank Baker, among others. Only one of the most similar players to Chance is in the Hall of Fame, but that man, Billy Southworth, was inducted for his managerial acumen, not his playing career. On the other hand, none of the most similar players has an Adjusted OPS anywhere close to Chance (the closest is his contemporary, John Titus, who had a 127 Adjusted OPS) as the similarity scores method does not account for era. Although he never led the league in hit-by-pitch, he ranks 33rd on the all-time list, with runner-up finishes in the league twice.

In addition to playing and managing in the National League, he worked one game as a fill-in umpire in 1902.