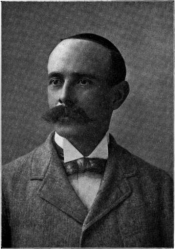 Frank Selee was the skipper of the Boston Beaneaters for twelve years and led the club to five pennants; three times in succession, 1891-1892-1893, and two in a row, in 1897-1898. The 1892 Beaneaters were the first major league club to win 100 games in a season. Selee later managed the Chicago Cubs for four seasons (1902-1905) and was responsible for assembling the famous Tinker-to-Evers-to-Chance double play combination.

Selee was a native of Melrose, MA and played ball with an amateur team in that city. He first played professionally in 1884 with the Waltham Club but finished the season with Lawrence. During the 1885 and 1886 seasons he managed the Haverhill team of the New England League. On the club were such players as Mike Slattery, Jimmy Cooney, and Elmer Foster. In 1887 Selee managed the Oshkosh team which won the championship of the Northwestern League. In 1888 and 1889 he managed the Omaha Omahogs which won title championship of the Western Association in his second year with the club. During the 1880s, he also scouted for Boston.

In 1890 Selee was engaged to manage the Beaneaters at the age of 30, and his reign was a success. In his first year the team finished fifth, but they captured the league pennant from 1891 to 1893. After a three-year string of third-place finishes the team won two pennants in 1897 and 1898.

Selee was highly respected for his knowledge of ballplayer ability - his 1890s Boston teams were made up of many future Hall of Famers such as Kid Nichols, John Clarkson, Hugh Duffy, Tommy McCarthy, Jimmy Collins, Billy Hamilton, and Vic Willis.

After slipping a bit in the last two years with Boston, he moved to Chicago, where he began building the great Cubs teams of the period. By 1905, when his health forced him to turn over the manager's position to Frank Chance, he had put together most of the talent on the team that was to be so dominant from 1904-1913, when they won at least 90 games each year.

Selee was a short, balding man with a large mustache.

He and Sid Farrar operated a clothing store together after Sid's major league days.

"He has never failed, in minor or major leagues, to get together a team of winners." - Sporting Life, 1893