“The two best third basemen I ever saw, defensively, until Ossie Bluege came along, were Collins and Bill Bradley... Collins... was a shade the better." - Clark Griffith, quoted at Jimmy Collins' Hall of Fame page 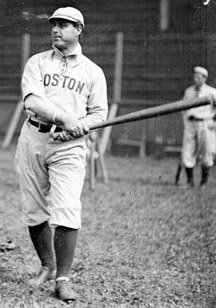 Jimmy Collins spent the majority of his fourteen-year career in Boston with the Beaneaters and the Americans. He was a fine hitter but is best remembered for his defensive play as a third baseman.

As a rookie in 1895, Collins reached the majors as a right fielder with the Beaneaters before being loaned to the Louisville Colonels for the remainder of the season. Upon his return, he quickly became the regular for Boston at the hot corner. The team won the pennant in 1897, conveniently when Jimmy broke out with a .346/.400/.482 batting line, 103 runs scored and 132 RBI. They repeated in 1898, when Collins hit .328/.377/.439 with a National League-high 15 homers paired with 107 runs scored and 111 RBI.

Considered the best third baseman as the century turned, Collins was one of the star players who defected from the National League to join the Boston Americans of the American League as player/manager in 1901. While he was not quite the star that Nap Lajoie and Cy Young were, his defection was still significant and helped to lend credibility to the new league. In his first year, he hit .332/.375/.495 with a career best 108 runs scored as his team finished second. Two years later, in 1903, he led them to a pennant and triumph in the first World Series, batting .250 with 5 runs scored in victory over the Pittsburgh Pirates. They repeated as AL champs in 1904, but no Series was held that year, as the New York Giants refused to play the champions of what they considered an "upstart" league. After a slow start in 1906, Collins was replaced as Boston skipper by Chick Stahl, and the next season he was traded to the Philadelphia Athletics, with whom he ended his career.

Collins was regarded as the finest defensive third baseman of his day, and is widely credited with creating something resembling the modern style of third base defense. He is specifically credited with having developed the barehanded pickup and off-balance throw to first base in defending bunts. He was inducted into the Hall of Fame in 1935, the first man to be honored for his work at third base. Additionally, he was an original member of the Boston Red Sox team Hall of Fame.

Following his playing days, Collins spent three seasons as a minor league manager before leaving the baseball world. He wisely invested his savings in real estate and lived off that until they were wiped out during the Depression of the 1930s. After that, he worked in the Parks Department of his hometown of Buffalo. Dying in 1943, his wake is recounted in the Dropkick Murphys 2013 song, "Jimmy Collins' Wake".