"(He) took pride in two things - his election to (the Hall of Fame), and the fact he was never removed from a game for a relief hurler." - from the New York Times obituary of Kid Nichols

With 361 career wins, Charles "Kid" Nichols was one of the 19th Century's great pitchers. He was the 1890s winningest pitcher and played on five pennant-winning squads in that decade. 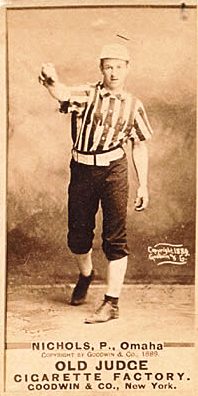 After playing for an amateur team in Kansas City, Nichols began his pro career with the Kansas City Cowboys of the Western League as a 17-year-old in 1887 and won 21 games that summer, while earning the nickname that would follow him the rest of his life. He split the next summer between Kansas City and the Southern League's Memphis Grays, a team which featured the 38-year-old Davy Force, a famous player more than twice Nichols' age. In 1889, he joined skipper Frank Selee's Omaha Omahogs of the Western Association and posted a 36-12 record.

Nichols joined the Boston Beaneaters of the National League in 1890 when Selee became the club's manager, and in his first big league season, he went 27-19 with a 2.23 ERA, 47 complete games, and a National League-best 7 shutouts. The following summer, in 1891, he won 30 games as the team captured the NL pennant. He posted an even better record in 1892, going 35-16 and winning two games in the league's Championship Series as the team defeated Cy Young and the Cleveland Spiders.

Nichols again paced the National League in wins in 1897 with 31, and his team captured another league crown. The Beaneaters repeated as champs the next year, and Nichols won 31 games again, leading the circuit in victories for the third straight season. However, his fortunes, and those of his team, declined in the next several years, and he went 13-16 in 1900, posting the first losing record of his big league career. The following summer, many of his teammates jumped to the Boston Americans of the new American League, but he remained with the Beaneaters and won 19 games. However, after that season, he was let go by the club in order to save money. He umpired a total of three games in the National League in 1900 and 1901.

In 1902, Nichols went back to the minors as a player-manager with the Kansas City Blue Stockings of the Western League and was also a part-owner of the team. He was 26-7 in his first year there, and the club went on to win the league crown. The next summer, he posted a 21-12 mark.

Nichols returned to the majors in 1904 as player-manager of the St. Louis Cardinals. He won 21 games in his first year with the team, as the club finished just under .500. He was fired as skipper just 14 games into the 1905 campaign and later that summer claimed off waivers by the Philadelphia Phillies. He won 10 games for Philadelphia in 1905 and made just a handful of appearances for the team in 1906. He ended his playing days following a stint with the Pueblo Indians of the Western League in 1908.

Following his playing days, Nichols managed the Oshkosh Indians of the Wisconsin-Illinois League in 1908 and led the Bonham Sliders of the Texas-Oklahoma League in 1914. He coached Missouri Valley College during World War I. He later ran a movie distribution business and partnered with Joe Tinker to open a chain of bowling alleys in Kansas City. He went on to live a long life and was inducted into the Hall of Fame at age 79, four years prior to his death. His election took a long time as he was off the radar in Kansas City, when major league baseball went no further west than St. Louis, MO, and because by the time the Hall opened in 1936, not many people remembered his exploits of four decades earlier. Thus, a number of much less qualified pitchers were let in before him. One interesting note is that he and Cy Young both made their debut in 1890, and by the end of of the decade, Nichols was ahead of him in terms of career numbers; however, Nichols was about to start his decline at that point, whereas Young won over 200 games in the 20th Century.

"You never heard anyone with a sore arm in my day. When we weren't pitching, we either played the outfield or doubled as ticket takers. The biggest strain my arm ever underwent was at the Polo Grounds when I counted 30,000 tickets." - Kid Nichols, 1948