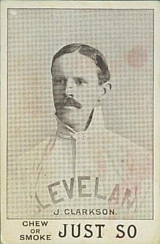 “Clarkson is able to pitch every other day for the reason that instead of adopting (Amos) Rusie’s method of firing the ball at the catcher with cannonball speed, he depends entirely upon head work, change of pace, and the fielders back of him. In this way Clarkson saves his arm, and is still ready for the finish.” - Chicago Daily Inter-Ocean, July 22, 1891

“I faced him in scores of games and I can truthfully say that never in all that time did I get a pitch that came where I expected it or in the way in which I guessed it was coming.” - Sam Thompson 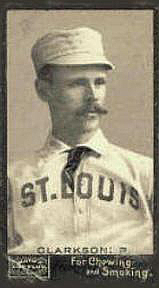 Hall of Fame pitcher John Clarkson was one of baseball's top moundsmen, dominating for nearly a decade in the National League's formative years.

John rose to prominence with the Chicago White Stockings, winning 53 games with a 1.85 ERA for the club in 1885 while making 70 starts with a league leading 68 complete games, 10 shutouts, 308 strikeouts and 623 innings, all totals for a starter (except the strikeouts) that are completely unfathomable in this day and age. Of course, such a season would not have been complete without at least one no-hitter, John spinning his lone career gem against the Providence Grays on July 27. His arm did not give out from such a workload; far from it. Following a "mere" 466 2/3 innings and 36 wins in 1886, he led the NL with 60 games, 56 completeys, 523 innings, 237 strikeouts and 38 wins in 1887. According to Cap Anson in 1910, John could be extremely sensitive to criticism and required a fair amount of encouragement to be counted on to crush it on the mound outing after outing.

With that in mind, Clarkson was promptly sold by the White Stockings, skippered by one Cap Anson, to the Boston Beaneaters in 1888 for the princely sum of $10,000. He formed the $20,000 Battery with another sound Boston purchase, Mike "King" Kelly, winning 33 games in 54 starts and a league leading 483 1/3 innings in year one of his new arrangement. His final, unbelievable (and truly insane workload) season came in 1889, leading the league in games (73), starts (72), complete games (68), shutouts (8), innings pitched (620!), strikeouts (284) victories (the 49 in a 49-19 record) and ERA (2.73). John was the fourth man to win a pitching triple crown, following Tommy Bond, Guy Hecker and Old Hoss Radbourn. He also became the first man in history to pitch an immaculate inning, retiring Jim Fogarty, Sam Thompson and Sid Farrar of the Philadelphia Quakers in quick succession on June 4.

He was still able to rack up wins over the next few seasons, but John would never be as dominating as 1889 again. He initially joined, then backtracked on the Players Rebellion of 1890, sticking with the Beaneaters for a 26 win season with a ballooning 3.27 ERA (his largest since a 3 game debut stint with Worcester in 1882). He aided Boston's pennant in 1891 with his final 50 start season, also leading the NL (albeit retroactively) with 3 saves to couple with a 33-19, 2.79 record. The Beaneaters released him in 1892 and John moved to the Cleveland Spiders for the remainder of his career, moved out of his usual ace role by a young man who would prove to be the ultimate ace, Cy Young. He retired in the midst of a tough 8-10, 4.42 season in 1894, finishing his career with a then National League record record 328 victories plus 1,978 strikeouts in just twelve seasons.

In addition to a good fastball, John was known for his outstanding sidearm curveball which had tremendous breaking action, mystifying opposing batters. He also developed an overhand sinker when the rules about pitching overhand were relaxed. Additionally, he was a strong hitter for a pitcher, batting .219 with 24 home runs, still good for 7th best all-time. It was therefore surprising it took John such a long time to make it to the Hall of Fame, even though his career numbers are almost equal to those of Charley Radbourn, who was among the first inductees by the Veterans Committee. No other pitcher from the 1880s and 1890s was inducted until the early 1960s, including fellow 300-game winners like Pud Galvin, Mickey Welch and Tim Keefe. It took Early Wynn's well-publicized chase of 300 wins in 1962 and 1963 to bring attention to previous pitchers who had accomplished the feat, including Clarkson. He was the first of that group to be admitted, in 1963.

Clarkson came from an athletic family: he was the brother of Walter and Dad Clarkson and cousin of Mert and Walter Hackett. It was a well-to-do family, as their father was a jeweler in Cambridge, MA and his brothers attended Harvard. Like brother Dad, he was a fill-in umpire in the NL, working four games between 1888 and 1893. During and after his career, he coached pitchers at a number of colleges. He worked with Dartmouth in 1885, Harvard in 1887-1892, Yale in 1893-1894, Union College in Schenectady, NY in 1894, and Michigan in 1895 [1].

After baseball, John owned and operated a cigar store in Bay City, Michigan. In 1907, it was reported he was very prosperous, the result of owning a cigar store, but had to be placed in a nearby sanitarium due to failing health. In fact, he became mentally unstable due to chronic alcoholism. See [2]. Some 90 years later, a rumor emerged that, in his later years, he murdered his wife with a razor; this is false, as his wife was alive and by his bedside when he died of pneumonia in 1909, and there is no indication of his ever having been accused of any crime. There may have been some confusion with Terry Larkin, another pitcher for Boston in early major league days who did attempt to murder his wife, thankfully she survived.