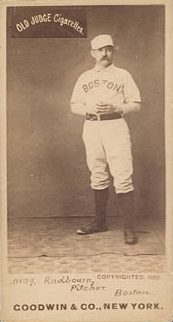 "Radbourn became so good with constant practice that he could throw the ball through a good-sized knothole in the fence." - Frank Bancroft, former Providence manager

"No better pitcher than Charley Radbourn ever lived. He was as near perfection as it was possible to find a man . . ." - Jim O'Rourke in 1915

If there is one record that will most certainly never be broken it is Charley "Old Hoss" Radbourn's 60 wins in 1884. This number is in dispute; it wavers, according to your source, from 59 to 61. But what is not under dispute is the fact that Radbourn had one of the most remarkable and gutsy seasons in baseball history.

Born in Rochester, NY, in 1854, Radbourn began his career with the Providence Grays in 1881, winning 25. He continued his winning ways, posting tallies of 33 and 48 wins in 1882 and 1883, posting the National League's second best ERA in both seasons. Hoss threw underhand and had a great curve ball and "in-shoot" or screwball which he used to great effect, as evidenced by his high strikeout totals. He no hit the Cleveland Blues on July 25, 1883, beating Hugh "One Arm" Daily, 8-0.

The 1884 Grays employed two primary starters at the beginning of the season, Radbourn, and young Charlie Sweeney. Radbourn, despite being 24-8 at the time, was suspended for "loafing" and "insubordination" on July 16th, leaving Sweeney as the team's ace. Less than a week later, Sweeney (17-8) was cut for missing practice and refusing to leave the mound during a game. Radbourn was reinstated, with the condition that he be released from Providence after the season and he be allowed to pitch in every remaining game. The "Ol' Hoss" just about managed to do this.

On July 23rd, the Hoss took the reins of the Grays' pitching duties and pitched in nine straight ball games, going 7-1 with one tie. After playing one game in right field, he pitched in six consecutive contests. He returned to the field, experimenting at shortstop for one game, then hurled in an incredible 20 games in a row. During this period, Radbourn had an amazing 18-game winning streak, although some sources credited him with up to 20 straight wins. Radbourn finally decided to take a rest on September 5th, with his Grays in the middle of a long winning streak.

In 1884, Charley "Old Hoss" Radbourn won an all-time record 59 games and then won all 3 World Series games for the Providence Grays. The discepancy about whether he actually won 60 or 61 games (sources differ) come from two games in which he came in in relief for Sweeney with the score tied, on July 8th and July 28th, and both times Providence won the game. Under modern rules, these would be considered relief wins for Radbourn, but at the time they were generally credited to Sweeney, but not always, as the rules for pitcher wins were fluid. Hence the continuing uncertainty about his true record. After the season he was probably tired, his total innings pitched including the Series was a record 700 2/3. It was an expansion year, which may explain some of it, but the previous year he had also won 48. Indeed, this total of 48 wins in 1883 is tied for fifth all-time. As a result of those two brilliant back-to-back seasons, he won 300 games in just 11 seasons. He ended with 309 career wins.

He won his first 20 decisions against Philadelphia: no other pitcher has ever done this, against any team. Four pitchers have started 19-1 against a team: Nig Cuppy against St Louis, Larry Jackson and Juan Marichal both against the Mets, and Roy Oswalt against the Reds.

After his playing career ended, Radbourn lost an eye in a gun accident. He later died of complications from syphilis at age 42.

He is a cousin of George Radbourn. His last name is spelled "Radbourne", with a final "e", in many sources. 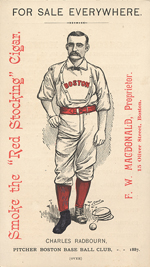