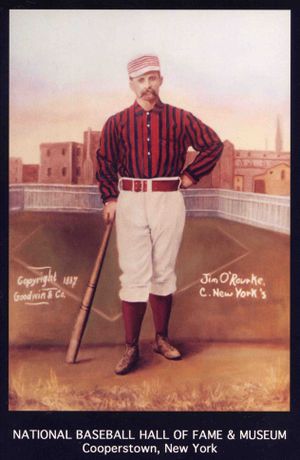 Jim O'Rourke is a Hall of Famer who hit .311 and scored 1,729 runs while playing in 23 seasons. For five of those seasons, he was player/manager.

He started in pro ball in 1872 and had his last major league appearance in 1904. Even after that, however, he made appearances in minor league ball through 1912. When he didn't come to the plate in 1913 on the advice of his physician, the New York Times noted that a string of 36+ years had been broken (the Times failed to note his years in the National Association).

He is the second oldest player in Major League history to hit safely in a game. According to the Hall of Fame and the U.S. Census Bureau, O'Rourke was born September 1, 1850. Thus, when he hit safely for the New York Giants on September 22, 1904... he was 54 years and 21 days old!!

Giants Manager John McGraw was a friend and former teammate of O'Rourke, so he allowed him to catch this one game. Ironically, it was the game in which the Giants clinched the 1904 pennant! O'Rourke became the last National Association player to appear in a major league game. McGraw also brought back former major leaguer (and O'Rourke teammate) Dan Brouthers for a couple of games in 1904, at the age of 46.

His son Jimmy O'Rourke followed him to the big leagues, while his brother John O'Rourke played in the major leagues as well. Jim O'Rourke served as an umpire in the National League in 1893 and 1894, for one game the first year but for 29 the second.

He is one of six players in major league history to play a game after age 50. The others are Satchel Paige, Minnie Minoso, Nick Altrock, Charley O'Leary and Jack Quinn. Also, Hoyt Wilhelm was sixteen days shy of his fiftieth birthday when he pitched in his last game.

O'Rourke also served as manager and owner of the Bridgeport Orators in the Connecticut State League as well as serving as league president for a spell.

"There was no paraphernalia in the old days with which one could protect himself. No mitts; no, not even gloves; and masks, why you would be laughed off the diamond had you worn one behind the bat. . ." - Jim O'Rourke, 1913

Sporting Life of December 4, 1915 had an extensive article about him (and interviewing him) called Jim O'Rourke's Wonderful Diamond Career. It stated that he started in baseball with the amateur Unions of Bridgeport in 1866. In 1867 he played with the Mansfields. After his major league playing days, he briefly tried being a major league umpire. In 1896 he was one of the organizers of the Connecticut League. He attributed his long career to clean living, and he attributed his financial success to saving his money instead of spending it.