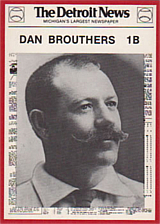 "Brouthers really was a great hitter, one of the most powerful batters of all time... I don't think I ever saw a stronger hitter." - John McGraw

"Frank Bancroft... thinks that Brouthers is the greatest hitter the world ever saw..." - Sporting Life, October 28, 1893

Brouthers while playing for the Buffalo Bisons

Dan Brouthers was the first great slugger in big league history. He has the highest Adjusted OPS of any 19th century player and ranks seventh all-time on the Black Ink test of appraising performance. He led the league five times in on-base percentage and seven times in slugging percentage.

Brouthers started in baseball as a semipro pitcher, but came to the majors at age 21, primarily as a first baseman. Big for his time, at 6'2" and 210 pounds, Brouthers broke in with the Troy Trojans team in 1879. At the time, the National League was a struggling young league and played far fewer games each year than it does today. Brouthers played for Troy for a couple of years, and then became a star with the Buffalo Bisons in the early 1880s. The Bisons were a team stocked with several well-known players, including The Big Four of which Brouthers was one. The player/manager was "Orator" Jim O'Rourke, and other players included Hardy Richardson, Jack Rowe, Davy Force, Orator Shaffer, Deacon White, and Hall of Fame pitcher Pud Galvin. Even with all that talent, the team did not win the pennant during Brouthers' years with them. "Big Dan" was a dominant player with the Bisons. He led the league in batting average and on-base percentage in 1882 and 1883 and led the league in slugging percentage all five years he played in Buffalo. However, the team suffered from chronic low attendance, and at the end of the 1885 season, its owners decided to sell their best players for large amounts, before disbanding the team. Other team owners objected to this, so the sales were not effective until the following season, but as a result of the moved, the Detroit Wolverines picked up Dan and several of his teammates.

1889 found him back in top form playing for the Boston Beaneaters, to whom he had been sold after Detroit dismantled its team along the lines Buffalo had followed a few years before. Boston finished only one game out of first place and Brouthers won the batting championship, and was second in on-base percentage and slugging, slashing .373/.462/.507. 1890 was the year of the Players League and Brouthers played for their entry in Boston, the Boston Reds, who finished first. He had been one of the leading members of the Brotherhood of Professional Base Ball Players, resenting the fact he had twice been sold for large sums of money without having a word to say or benefiting in any way from the transactions. Brouthers led the fledgling league in OBP but was not in the top five in either batting or slugging. When the Players League dissolved due to huge financial losses, Brouthers joined the Boston Reds of the American Association, another major league of the time. He thus had the privilege of playing for three different major league teams in Boston. As usual, Brouthers was the star of the team, which won the pennant. Brouthers led the league in batting, on-base percentage, and slugging (.350/.471/.512) with teammate Hugh Duffy second in average. Brouthers came back to the National League in 1892, playing for the Brooklyn Grooms and winning the batting title with a .335 mark. In 1893, he was not as dominant a player, as injuries limited him to 77 games at age 35.

In 1894, Dan and "Wee" Willie Keeler were traded to the Baltimore Orioles in what turned out to be a hugely lopsided deal, who thus became perhaps the best team of the 1890s. They won the pennant, and although the 36-year-old Brouthers was not the masterful player he had been, he was still second on the team in slugging. The team included such luminaries as Wilbert Robinson batting .353, John McGraw batting .340, Hughie Jennings batting .335, Steve Brodie batting .366, Joe Kelley batting .393, and Keeler batting .371. Brouthers batted .347. But that was to be Brouthers' last important season. The next year, as age had robbed him of the little speed he ever had and his fielding had degenerated beyond repair, he was replaced as the Orioles' first baseman and appeared in only 29 games, mostly with the Louisville Colonels. He retired in mid-year, but was convinced by his old Detroit teammate Sam Thompson to join the Philadelphia Phillies in 1896. He batted .344 in 57 games, and retired again. However, he wouldn't stay retired, played for various minor league teams, and in 1894, his former Orioles teammate John McGraw had him appear in 2 games with the New York Giants, whom he managed at the time, at the end of the season, when he was 46 years old. He then worked as a scout for McGraw for many years, as his attempt to earn a living by running a hotel in his hometown of Wappingers Falls, NY did not pan out. The November 30, 1907 issue of Sporting Life refers to Brouthers as the Giants' "chief scout". In later years, it is said that McGraw got him a job as night watchman at the Polo Grounds, along with Amos Rusie, and sometimes after games Brouthers, Rusie, and McGraw would sit around and reminisce about old times.

All told, Brouthers ranks ninth all-time in batting average, hitting .3424, just a hair ahead of a guy named Babe Ruth. There is no player truly similar to Brouthers, but all ten of the most-similar players to him are in the Hall of Fame, with the most similar being Roger Connor, another 19th century slugger. Brouthers has been compared to Mickey Mantle as well, due to the proclivity both of them had for high on-base percentages along with robust slugging percentages. Dan, however, played virtually all of his games as a first baseman, had none of Mantle's speed and was a left-handed batter, not a switch-hitter. A better comparison would be someone like Mark McGwire or Jason Giambi, pure slugging first basemen whose on-base percentages were also great, although Brouthers won a number of batting titles, something that was the "Moneyball" sluggers never did. But like them, he was decried for swinging for the fences and eschewing the "scientific" approach to the game that sportswriters favored. He was a big star in his days, but became somewhat forgotten in part because he changed teams so often - no other Hall of Famer has played for as many different teams as he did - and most of these teams no longer exist.

Dan's brother, Jimmy, played minor league ball. A field in Wappingers Falls is named Brouthers Field in his honor, and there is a monument to him there, calling him "the Iron Man of Baseball". Brouthers is buried in Wappingers Falls, which is only a few miles from his birthplace of Sylvan Lake, NY.