"Kelley was one of the greatest outfielders of all time. He was rated the kingpin of the Orioles outfield. He covered a lot of ground and was one of the best hitters in the league." - Dutch Brennan, former major league scout

Joe Kelley was a top hitter for a long time, hitting .317 lifetime in the majors. He was frequently among the league leaders in several offensive categories, especially in triples, but rarely led the circuit in any category, which perhaps led to his not being named to the Hall of Fame until many years after his death.

Originally a pitcher as an amateur, Kelley played for the Lowell Lowells of the New England League in 1891 and was 10-3 while hitting .331 with 21 stolen bases. He reached the majors in the later portion of that season as a 19-year-old outfielder with his hometown team, the Boston Beaneaters. However, after he had played just 12 games, the Beaneaters acquired superstar King Kelly from their rivals, the Boston Reds of the American Association, and Kelly was simply released. He began 1892 back in the minors with the Omaha Omahogs and hit .330 before being purchased by the Pittsburgh Pirates. Late in the year, he was traded to the Ned Hanlon's Baltimore Orioles for George Van Haltren. This was apparently a lopsided deal, as Van Haltren was an established star, but Orioles manager Ned Hanlon had seen something he liked in the young Kelley, and he would quickly be proved prescient. 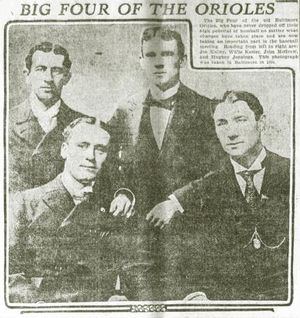 Kelley was the Orioles' regular centerfielder in 1893 before being moved to left field in 1894. That year, he hit .393 and had an on-base percentage over .500 for a 161 OPS+ while scoring 165 runs (but still finishing a distant second behind Billy Hamilton's 192 runs). He had one of the finest days in baseball history on September 3rd, going 9-for-9 in a doubleheader against the Cleveland Spiders with four doubles and a triple.

Two years later, in 1896, Kelley had a 164 OPS+ with a .364/.469/.543 batting line in a less friendly offensive environment and led the National League with 87 stolen bases. After hitting .352 in his six full seasons with Baltimore, he was sent to the Brooklyn Superbas prior to the 1899 campaign, and the team went on to capture pennants in 1899 and 1900. This was part of a number of uneven trades that strengthened Brooklyn at Baltimore's expense, as Ned Hanlon had ownership stakes in both clubs as part of that era's syndicate baseball. Wee Willie Keeler and Hughie Jennings, future Hall of Famers both, also made the trek to the "City of Churches" that off-season, turning the Superbas into a juggernaut.

The Orioles were known as the rowdiest team of the rowdiest era in baseball history, the 1890s, and Kelley was at the center of things, as only McGraw was more hated by umpires and opponents. He would continually argue with umpires and compiled a large number of ejections during his career, but he was also a winning ballplayer who could both hit clean-up and hit lead-off, and play the infield or outfield. The Orioles were not liked by their opponents, but a number of their players became prominent managers, including McGraw, Kelley, Jennings and Wilbert Robinson.

After the 1901 season, Kelley jumped to the Baltimore Orioles of the American League, as he had strong ties to the city and was a close friend of John McGraw, the team's manager. However, as part of more shady dealings in which he and McGraw were complicit, the Orioles ended up being the property of John T. Brush, owner of the New York Giants, and Kelley was released to allow him to join the Cincinnati Reds as player-manager for the next three and a half seasons. Brush's objective was to strip the Orioles of all their good players, force the team's collapse, and hopefully take the whole American League down with them. The plan failed as League President Ban Johnson intervened to save the Orioles long enough that they could complete their season, and then had them moved to New York, NY, where they would eventually become the New York Yankees. So one can say that Brush's plan backfired. In any case, after remaining with the Reds as a player in 1906, Kelley managed the minor league Toronto Maple Leafs in 1907. He returned to the majors for one more year in 1908 as player-manager of the Boston Doves, against his will, when Braves owner George Dovey plucked him in the 1907 Rule V Draft as he wanted to make him his team's manager. When the mercurial Dovey tried to break Kelley's two-year contract after one poor season, Kelley threatened to sue, and was eventually allowed to re-join Toronto, where he was much happier, managing the team until 1914. He was a New York Yankees scout from 1915 to 1925, and was a member of the Brooklyn Robins coaching staff in 1926, under old pal Wilbert Robinson, another former Oriole.

He was known to be a prototypical "old player" in that he denigrated younger ballplayers as not having the skills and talent of the "real men" of his generation. As a scout, he hardly ever recommended a player to be signed by the Yankees, as no one was able to meet his lofty standards. He was the last surviving star player from the great Orioles teams of the 1890s, but was largely forgotten by the time he was elected to the Hall of Fame by the Veterans Committee in 1971, 28 years after his death. His Orioles teammates McGraw, Keeler, Jennings and Robinson had been enshrined long before him, although he was arguably a much better player.

Although no player is truly similar to Kelley, the three most similar players (as of 2020) are all Hall of Famers: Hugh Duffy, Kiki Cuyler and Edd Roush. Duffy was a contemporary.