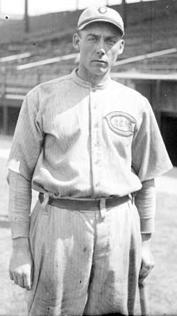 "He was far and away the best outfielder I ever saw." - Heinie Groh, talking about Roush's defensive talent

"I didn't expect to make it all the way to the big leagues; I just had to get away from them damn cows." - Edd Roush, quoted on the official Edd Roush website, about his childhood on the farm and getting up before dawn to do milking

Holder of a career .323 batting average, Hall of Famer Edd Roush was a two-time batting champion who played eighteen years in the majors, mostly with the Cincinnati Reds. He appeared in the 1919 World Series fixed by the Black Sox. He was a good center fielder and might have won several Gold Gloves if they had existed at the time.

Roush was also second in the league in batting twice, once closely behind Zack Wheat and once behind Rogers Hornsby. He also finished third twice behind Hornsby.

He was a 20-year-old rookie on the 1913 Chicago White Sox. He and Ray Schalk were the same age. He finished out his career with the 1931 Cincinnati Reds, a teammate of the 25-year-old Leo Durocher.

After his playing career, Roush was a Cincinnati Reds coach in 1938. He was inducted into Cooperstown in 1962 and the Indiana Baseball Hall of Fame in 1979.

Roush lived close to a hundred years, dying during spring training in 1988. He made his first baseball card appearance in the 1915 E145-2 Crackerjack set.

Last survivor of the Federal League.