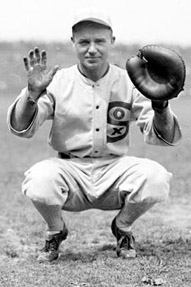 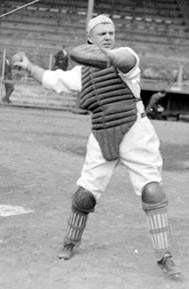 Catcher Ray Schalk was a mainstay with the Chicago White Sox for 17 seasons and was most noted for his defensive skills behind the plate. He showed some speed, swiping 30 bases in 1916, but was generally regarded as fairly weak offensively, hitting .256 over his career with no power (it is the lowest batting average for a member of the Hall of Fame). During the course of his career, he caught four no-hitters, one of which was a perfect game (one of the no-hitters, by Jim Scott, was later disallowed when the rules governing no-hitters were revised in the early 1990s). Up until his death, Schalk would send congratulations to every no-hit catcher. In 2008, Jason Varitek became the second catcher to be behind the plate for four no-hitters and Carlos Ruiz joined the exclusive club in 2015.

Schalk was the son of German immigrants and grew up in the small village of Harvel, IL. He attended school in the nearby town of Litchfield, IL, where he became a printer's apprentice. He moved to Brooklyn, NY for one year to pursue his training on a linotype machine, but upon his return to Illinois, left his profession to pursue a career in baseball. He hit .387 for Taylorville of the Illinois-Missouri League in 1911, then moved to the Milwaukee Brewers of the American Association. After hitting .271 in 80 games for Milwaukee in 1912, he was purchased by the Chicago White Sox.

Ray Schalk made his major league debut on the day he first arrived in Chicago, August 11, 1912, a day before his 20th birthday. The team's regular catcher, Billy Sullivan, was getting on in years and had never been much of a hitter, so there was a good opportunity for the youngster to make his mark. He was an outstanding defensive player. Standing somewhere between 5' 7" and 5' 9", he was very quick and much smaller than the typical bulky catchers of the time. In the Deadball Era, catchers played a huge defensive role, given the large number of bunts and stolen base attempts, as well as the difficulty of handling the spitball pitchers who dominated pitching staffs. Schalk excelled at all of those aspects of the game, working particularly well with spitballers Scott and Ed Walsh and knuckleballer Eddie Cicotte. In the days before pitching coaches, Schalk filled the role from behind the plate, directing a talented group of pitchers with tremendous aplomb. His mediocre hitting was secondary given these various other qualities, and his great longevity at a position where careers were usually quite short was another plus. His longevity extended to the season itself: in 1920, he caught 151 of his team's 154 games. He was also almost a fifth infielder from his position, fielding bunts and backing up plays everywhere on the field (in his career as a catcher, he registered a put-out at every base). 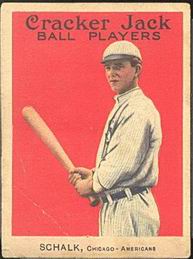 Schalk was a big part of the White Sox's triumph over the New York Giants in the 1917 World Series. He caught every inning behind the plate and contributed a .263 average. In the 1919 World Series, he was one of the "clean" White Sox left untouched by the Black Sox Scandal. He knew something was amiss with pitchers Eddie Cicotte and Lefty Williams as they refused to follow his signals, and he became increasingly frustrated, eventually being ejected from Game 5 when he could take no more. He batted .304 for the Series, then followed that with one of his best seasons in 1920. However, the Sox sank back into mediocrity after seven of their players were banned from baseball for their part in the Black Sox Scandal after the 1920 season. He did help the team tremendously in 1923 when he discovered a young Ted Lyons pitching for Baylor College in Texas and urged Charles Comiskey to sign him.

Schalk also managed the Sox in 1927 and for part of 1928, succeeding Eddie Collins. However, he had limited success, then came into disagreement with Comiskey over his salary, and left the Sox to become a player-coach with the Giants in 1929. He was a coach for the Chicago Cubs in 1930 and 1931, then managed the Buffalo Bisons of the International League from 1932 to 1937, the Indianapolis Indians for 1938 and part of 1939, followed by a stint at the helm of his former team, the Milwaukee Brewers. During World War II, Schalk managed bowling alleys in Chicago, making appearances to sell bonds and becoming a scout for the Chicago Cubs. He was also an assistant coach at Purdue University from 1947 to 1963.

Quote: "Red Faber was ill during the (1919) Series. But if he'd been able to (pitch), we'd have beaten the Reds despite the gamblers." Ray Schalk.