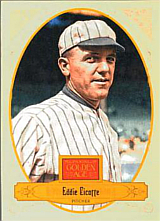 “Perhaps no pitcher in the world has such a varied assortment of wares in his repertory as Cicotte... He throws with effect practically every kind of ball known to pitching science.” - The Sporting News, 1918

“Nobody can hurt me anymore... I’ve tried to be a good father, a good grandfather and a good husband.” - from Eddie Cicotte's obituary, The Sporting News 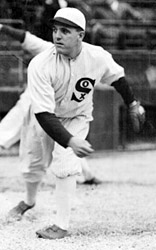 Eddie Cicotte was one of baseball's most effective pitchers in the second decade of the American League. He is best remembered for being banned from baseball as part of the Black Sox Scandal for his alleged involvement in fixing the 1919 World Series. His major league record was 209-148, and while he was 36 years old in his last major league season, he had gone 21-10 and could have been able to pitch several more seasons.

While his name may look to be of Italian origin on the surface, he was in fact of French-Canadian background, his family name being a variation of Sicotte, a common last name in Quebec. This confusion led to uncertainty about the correct pronunciation of his name, which was often rendered as "Cy-cottie" (which is the way the pitcher pronounced his name while pitching) at the time, although it most likely would be SEE-cott.

Known for an arsenal of trick pitches such as the knuckleball, shine ball, emery ball, and spitball, Cicotte made his big league debut as a 21-year-old with the Detroit Tigers in 1905 (Ty Cobb was also a rookie on the team), spinning a complete game with a 1-1, 3.50 record in 3 games. He did not see regular action in the majors until he joined the Boston Red Sox in 1908. He won at least 11 games in each of four full seasons in Boston, during which he feuded repeatedly with team owner John Taylor, before being purchased by the Chicago White Sox midway through the 1912 campaign.

With Chicago, Eddie quickly became one of the league's top pitchers, going 18-12 with a 1.58 ERA in 1913. Despite an 11-16 record the following season, he posted a 2.04 ERA in 269 1/3 innings. He battled to a 13-12, 3.02 mark in 1915, then enjoyed a fine 15-7, 1.78 record with a (retroactive) personal best 5 saves in 1916. In 1917, Cicotte had his best season to this point, leading the American League with 28 wins and a 1.53 ERA as the White Sox won the World Series. On April 14th, he pitched a no-hitter against the St. Louis Browns. He tossed 29 complete games in 49 appearances, finishing with 7 shutouts and a league best 346 2/3 innings. Facing the New York Giants in the World Series, he pitched a 2-1 complete game victory in Game 1, but lost Game 3 opposing a 2-0 shutout by Rube Benton. In Game 5, he pitched six innings in relief of starter Reb Russell, who put the Sox down 2-0 while failing to retire a single batter, as the White Sox came roaring back to win the game, 8-5. Overall, he pitched 23 innings in the Series, while teammate Red Faber pitched 27, and three other pitchers combined for the team's other three innings.

Eddie had a hard luck 1918, going 12-19 (leading the league in losses) but with a 2.77 ERA in 38 games. He bounced back in a big way in 1919, with a league-leading 29 wins (29-7) as the Sox reached the World Series once again. He started that season with 12 wins in his first 12 starts, which is still a team record. He lost 2 of his 3 starts that October, pitching ineffectively for reasons that stunk to many at the time but would not become crystal clear until nearly a year later. Eddie was 21-10 with a 3.26 ERA in 37 games in 1920 when he became the first of the Black Sox to cop to being involved in the fix of the Fall Classic. Apparently, Cicotte participated because he was angered at being paid less than several other pitchers of his caliber, and he accused White Sox owner Comiskey of being an "old, cheap ass bastard." At that point, he was responsible for the livelihood of an extended family of 12 persons including elderly parents and in-laws, according to the 1920 Census, and was in a financial squeeze. 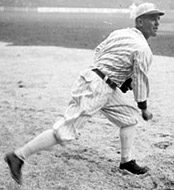 In testimony before the grand jury investigating the Black Sox Scandal, and in later testimony in a 1924 trial where three former teammates sued the Chicago White Sox for back pay, he admitted to having taken money from gamblers in 1919, but denied that he had done anything but tried his best to win at all times (after plunking Morrie Rath, the Series' first batter, as a signal that the fix was on, that is; he also made a number of egregious fielding errors during his first two Series starts that led directly to White Sox losses). He added that the conspiring players had soured on the deal after the gamblers had failed to come up with the promised funds after the first two games. He did, however, take in $10,000 for his part in the deal, and used $4,000 of it to buy back the mortgage on his farm in Michigan.

There is a famous legend that states that Comiskey had promised Cicotte a large bonus for winning 30 games in 1919, and then told manager Kid Gleason not to use him in the season's last days to keep his star pitcher from reaching the milestone. There is no truth to this: for one thing, the fix was agreed in early September, and for another, if anything, Cicotte was overused in the season's last weeks while the pennant was already sewn up. What may have sparked this legend is that something similar took place in September 1917, when Cicotte approached a 30-win season that would win him a promised $10,000 bonus. According to Eliot Asinof, Comiskey had the pitcher benched rather than give him a chance in his final few starts; he ended with 28 wins.

There was a trial against the eight players accused of dumping games in the 1919 World Series. During said trial, it was discovered that Cicotte's signed confession, as well as other vital evidence to prove the conspiracy, had mysteriously disappeared, never to be found. Though the players were found innocent, Commissioner Kenesaw Mountain Landis ultimately banned everyone involved for life. Cicotte played briefly for outlaw teams in Minnesota and Wisconsin upon being banned, alongside other former teammates, then returned to his home in Michigan and lived under a pseudonym to protect his family. He would tell anyone who asked that he admitted that what he did was wrong, but that he had tried to make up for it by living cleanly afterwards. In the film Eight Men Out, Eddie was portrayed by David Straithairn. In the film Field of Dreams, released one year later, he was portrayed by Steve Eastin.

Cicotte might have gone into the Hall of Fame if he had not been one of the Black Sox. The three most similar pitchers, based on the similarity scores method (Stan Coveleski, Chief Bender and Jack Chesbro), are Hall of Famers, with a fourth Hall of Famer (Dazzy Vance) among the top 10. and he was still dealing well enough that he might have pitched effectively for several more years.

Years later, his great nephew, Al Cicotte, played several years in the majors, including 1957 for the New York Yankees. The grand-nephew pronounced the name "See-cott", going back to the original pronunciation but also distancing himself from the Black Sox scandal. Eddie lived to see all of Al's big league career, dying in 1969 at 84. 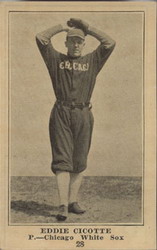