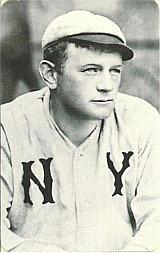 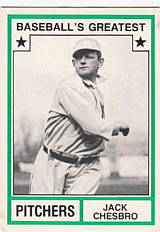 Jack Chesbro was a successful pitcher at the dawn of the 20th century, winning 198 games in 11 seasons. He is best remembered for recording 41 wins in 1904.

Nicknamed "Happy Jack", Chesbro began his minor league career in 1895. He broke into the majors in 1899 with the Pittsburgh Pirates, going 6-9 with a pedestrian 4.11 ERA in 19 games. After going 15-13 in 1900, he won 21 games the next summer while leading the National League with 6 shutouts. He began throwing a spitball the next season (spitballs were legal until 1920) and went an astonishing 28-6 with a 2.17 ERA, leading the circuit in wins and shutouts (8). In 1903, Chesbro jumped to the upstart American League, joining the newly formed New York Highlanders (later to be known as the New York Yankees). He pitched the franchise's first game and went on to record 21 victories with a 2.77 ERA that season.

In 1904, Jack had one of the finest years in the history of pitching. He picked up a trifecta with a league leading 55 appearances, 51 starts and 48 complete games, tossing an astonishing 454 2/3 innings. Even with all the work, he posted a slim 1.82 ERA, struck out 239 batters, and finished 41-12 with 6 shutouts in a year no other pitcher in the league won more than 26 games. On the last day of the season, in a game against the Boston Pilgrims, he threw a wild pitch in the top of the 9th inning, allowing the winning run to score from third base and causing the Highlanders to lose the pennant to Boston.

Chesbro served as a Washington Senators coach in 1924 before being let go in May for cost-cutting reasons. He died of a myocardial infarction in 1931. Posthumously, he was inducted into the Hall of Fame in 1946 by the Veterans Committee after doing poorly in balloting by the BBWAA. He gained election after Old Hoss Radbourn was elected on the strength of setting the National League mark for wins in a season; he got in largely because he was the holder of the equivalent mark in the American League, even though a number of better qualified pitchers, including a number of 300-game winners, were not in yet. In fact, his career record of 198-132 with an ERA of 2.64 is very similar to that of three of his teammates with the great 1902 Pittsburgh Pirates: Deacon Phillippe went 189-109, 2.59; Sam Leever was 194-100, 2.47; and Jesse Tannehill was 197-116, 2.79. None of the three are in the Hall of Fame, a sign that Chesbro's election was entirely due to his one record-breaking season.

His 1904 record for games won in a season (41) has stood for over a century, which is one of the oldest major records in baseball or in any other sport. Under current playing practices, his record is just about unbreakable. Chesbro started 51 games that season (plus 4 relief appearances) and pitched 48 complete games, for a record of 41-12. Today, it is uncommon for a pitcher to start even 35 games in a season and complete games are a rarity. The only other 40-win season since 1900 was 40 by Ed Walsh in 1908 (Walsh was also a spitballer). To put Chesbro's performance in perspective, in the 1880s it was common for league-leading pitchers to win 40+ games. It was last done, prior to Chesbro, in 1891, by Bill Hutchison.

Some or all content from this article is licensed under the GNU Free Documentation License. It uses material from the Wikipedia article "Jack Chesbro".