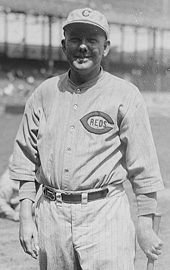 Pitcher Rube Benton reached the majors with the Cincinnati Reds in 1910. Within a few years, he was a key part of the team's rotation but also earned a reputation for his drinking. He was traded to the New York Giants in 1915; the deal was originally announced as Benton to the Pittsburgh Pirates for $4,000, but the Giants claimed they got Benton for $3,000. National League President John Heydler subsequently ruled that Benton was property of the Giants. In the 1917 World Series, he threw a five-hitter to beat the Chicago White Sox in Game 3 but got the loss in Game 6 as the Sox scored four unearned runs. After missing most of 1918 while serving in the Army during World War I, he came back in 1919 to go 17-11 with a 2.63 ERA.

After the 1920 season, Benton was implicated as being a part of the Black Sox Scandal. He admitted to having bet on baseball but denied any knowledge of the 1919 World Series being fixed. No evidence was found of Benton's involvement, and he returned to the Giants in 1921. Despite going 5-2 with a 2.88 ERA for the Giants in 1921, Benton was sent to the St. Paul Saints in June. After going 22-11 with the Saints in 1922, he was traded back to the Reds. Heydler, back in the position of ruling on Benton, would not allow the deal, saying Benton was ineligible to play in the NL because of "undesirability". The ruling was appealed, and Benton was eventually reinstated by Commissioner Kenesaw Landis.

After his big league career, Benton pitched for the Minneapolis Millers for eight seasons. He seriously injured his pitching hand in a car accident after the 1930 season but came back and was 13-13 the next year. In 1932, at age 45, he was 18-7 as the Millers won the American Association title. In 1933, he briefly managed the Huntington Boosters. He retired in 1934 and was killed in a car accident in 1937.