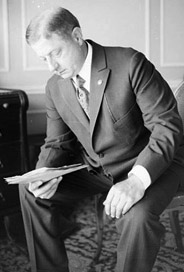 Now largely forgotten, John Heydler was one of baseball's renaissance men from the late 19th century through the middle of the 20th century. He took a job as a National League umpire in 1898, leaving behind a government position. He had previously worked a handful of games every year from 1895 to 1897.

Nine years later, Heydler was named National League president a second time. He replaced John Tener in the league office. Heydler served sixteen years in the post. He was influential in the election of Kenesaw Mountain Landis as baseball's first Commissioner and in the establishment of the Hall of Fame.

After his retirement as league president at age 65, Heydler was named Chairman of the National League. A position he held until his death.