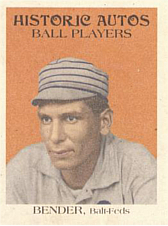 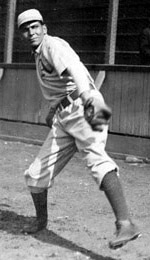 Hall of Famer Chief Bender won 212 games in sixteen years in the majors and is best remembered a member of the great Philadelphia Athletics rotation of the early 1900s that also included Rube Waddell, Eddie Plank, and Jack Coombs. His brother, John, played professionally as well.

Bender was a half-Chippewa Indian from Minnesota and attended the Carlisle Indian School. He debuted in the majors with the Athletics as a 19-year-old and threw a four-hit shutout versus the New York Highlanders to win his first game in 1903. He later threw a no-hitter on May 12, 1910, against the Cleveland Naps. In a dozen years with the Athletics, he twice won 20 games and three times finished the season with an ERA below 2.00. Philadelphia reached the World Series five times with him on the club and won three world championships. In the postseason, Albert (as manager Connie Mack always called him, though Bender himself signed autographs as "Charley") won 6 of 10 starts, throwing complete games in 9 of them. Bender jumped to the Baltimore Terrapins of the Federal League in 1915 but did not find much success, going 4-16 in one year. He returned to Philadelphia in 1916, this time as a member of the Philadelphia Phillies, but he did not duplicate his earlier success, going 15-9 over the course of two seasons. According to the book The Pitcher, Ty Cobb called Bender the "brainiest pitcher" he ever saw. In 1907, he umpired one American League game.

After his playing days, Bender was a coach for the Chicago White Sox in 1925 and 1926 while former teammate Eddie Collins was the club's manager, and he also pitched one inning of one game for the Sox in 1925. He was later on the staff of the New York Giants in 1931 and the Athletics from 1951 to 1954. He was also the head coach at the United States Naval Academy from 1924 to 1928 and a scout for the Athletics from 1945 to 1954. Additionally, he spent several seasons as a minor league manager.

Off the diamond, he was a champion trapshooter at a time when the sport was very popular among ballplayers. He was often pitted in lucrative shooting exhibitions in the offseason and, in November 1915, performed a tour of 18 cities in 20 days in which a team of four ballplayers was pitted against the best local shooters from each location. Bender teamed up with Doc Crandall, Christy Mathewson and Harry Davis and easily outperformed all of them. The tour was extremely successful and drew record crowds at its various stops. He took an offseason off from trapshooting in 1911 while he performed in a vaudeville show entitled Learning the Game alongside teammates Jack Coombs and Cy Morgan.

He was elected to the Hall of Fame in its 1953 election as one of the first candidates enshrined by the Committee on Baseball Veterans. However, he died a few months before his induction, which took place in August 1954. In 1991, Bender was posthumously added to the Philadelphia Baseball Wall of Fame.

Discrepancies persist about Bender's birth year and birth date. His sister produced a birth certificate (obtained in 1942) which said he was born on May 3, 1883 (as described in the SABR 1983 Research Journal), and his obits in 1954 said he was 71. Also, SABR elected him as the Centennial Celebrity of 1983 (best baseball player or figure born in 1883).