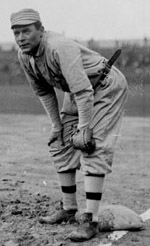 Harry Davis played 22 years in the majors (although the last six were just occasional appearances). He was a mainstay of the Philadelphia Athletics teams from 1901, when the American League first became a major league, through 1911. He was on World Series teams in 1905, 1910 and 1911. Stuffy McInnis replaced him on the $100,000 infield in 1911, and Davis went to Cleveland in 1912 to become the manager. He was back, however, with the A's from 1913 to 1917 as a player-coach and continued as a coach for a decade after that.

His 134 score on the Gray Ink test (the average Hall of Famer has 144) shows that he was often among the league leaders in offensive categories. He led the league four times in homers, three times in doubles, and once in triples. He was the top home run hitter from 1900 to 1909, hitting 67 in that span. He outpaced Piano Legs Hickman by 9.

He umpired one American League game in 1903.

After his playing days, he worked in the office of the Receiver of Taxes in Philadelphia, PA and later was elected to the city council. As a scout, he discovered Al Simmons for the A's.