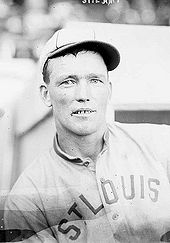 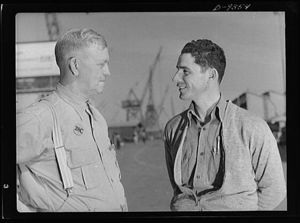 Stovall (left) speaks with Vince DiMaggio at a California shipyard during WW2 in a gov't propaganda photo. 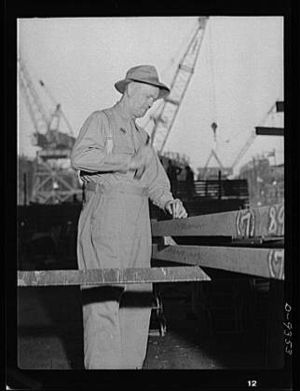 George Stovall played twelve years in the majors during the dead-ball era and was also a player-manager during five of those years.

He primarily played first base, although early in his career he filled in quite a bit at other infield positions and occasionally in the outfield.

Not a great hitter, his best year with the bat was 1908 when he was seventh in the league in both batting average and slugging percentage.

Reputed to have a hot temper, he was nevertheless a very popular player in Cleveland. The fans were sorry to see him go to St. Louis, where he was player-manager for a couple years but left under a cloud of controversy. While with the Federal League he was successful in luring quite a few major leaguers over to the new league.

The most similar player is his contemporary Kitty Bransfield.

George's brother Jesse Stovall pitched for the Cleveland Naps with a record of 5-1 in 1903, the year before George came up. In 1904, George made his debut with Cleveland, but Jesse was now with the Detroit Tigers. On October 7th, George hit the first home run of his career against his brother, who was pitching the final game of his career.

George played for the Toledo Iron Men in 1916 and managed the Vernon Tigers in 1917. He then worked in the shipyards during World War I. He managed the Jacksonville Indians in 1922. Afterwards he managed semi-pro teams in California and was a coach at Loyola Marymount University. He then scouted for Pittsburgh and later again worked in the shipyards, building Liberty ships in the California shipyards during World War II (as shown in the picture above).