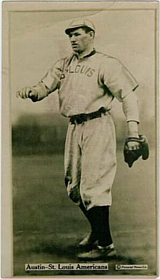 "I guess most people must have thought I was crazy. Twenty-four years old and leaving a good job to go off and play a boys' game. After just finishing four years of apprenticeship, too, and finally getting to be a full-fledged machinist. In a way, I guess it did look like I was off my rocker. But it all depends on how you look at it. Me, I was always crazy about baseball." - Jimmy Austin, speaking with Lawrence S. Ritter for his 1966 book The Glory of Their Times

Jimmy Austin was a long-time regular third baseman for the New York Highlanders and St. Louis Browns during the deadball era. A slick fielder, he also stole bases and drew many walks. He was a player-manager for the team for parts of three years, serving as Branch Rickey's "Sunday manager" during "The Mahatma"'s time as Browns manager, and was a coach for the team from 1923 to 1932, making a couple cameo appearances as a player. Later, he also coached for the Chicago White Sox from 1933 to 1935, 1937, 1939 and 1940.