Note: This page is for Hall of Fame pitcher Eddie Plank; for the pitcher who played in the 1970s, click here. 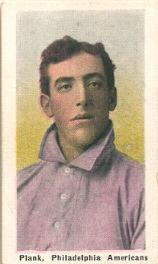 Eddie Plank was a Hall of Fame pitcher who spent most of his career with Connie Mack's Philadelphia Athletics from 1901 to 1914. While he was often overshadowed by some of the more celebrated pitching stars of his era such as Christy Mathewson and Walter Johnson and was never considered the best pitcher in the league, Plank consistently ranked among the league's top pitchers for many years and complied a record of achievement that is among the best in the game's history.

Plank was born into a farming family in rural Pennsylvania. He spent his early years working on his father's farm just north of Gettysburg and never played baseball until he was seventeen. As a young adult he enrolled in a prep school owned by Gettysburg College and was recruited to pitch for the college team by their coach. There he caught the attention of Connie Mack, who signed him to pitch for the Athletics. He joined the Athletics in May of 1901 at the age of 25, having never pitched in the minor leagues.

Plank was an immediate success in the major leagues, winning 17 games in his rookie season. He pitched consistently well for the Athletics in the early 1900s, but was less acclaimed than his teammate Rube Waddell. He helped the team win two pennants during these early years of his career, in 1902 and 1905.

Plank playing for Philadelphia in 1909.

Plank was an important part of Connie Mack's first great dynasty, the 1910-1914 Athletics. The team won four American League pennants and three World Series during a five year span, and is often included in discussions of the greatest teams ever. Plank was 34 years old when this championship run started and he was once again overshadowed by (this time younger) teammates on the pitching staff, Jack Coombs and Chief Bender. Still, he averaged over 19 wins a season during this span and never had an ERA over 2.87. Connie Mack considered him his most reliable pitcher.

Plank's 2-5 record in the World Series does not look impressive, but his World Series ERA was 1.32 and most of the losses can be attributed to poor run support. His World Series losses were by scores of 3-0, 1-0, 4-3 (in relief of Coombs), 3-0 and 1-0. He won the decisive game of the 1913 Series by outdueling Christy Mathewson of the Giants 3-1.

Plank was notorious for being slow to deliver the ball to the plate, often engaging in elaborate rituals adjusting parts of his uniform, rubbing the ball and asking his catcher to repeat signs. His pitching style has been described as a crossfire motion with his arm coming from a 3/4 angle and throwing across his body. He was somehow able to maintain good control with this motion, almost always striking out twice as many hitters as he walked. Despite the fact that he did not pitch professionally until age 25 he had an illustrious 17 year career in which he set records for complete games and shutouts by a left-handed pitcher that have still not been equaled.

"With the opening of this season's campaign the American League entered into . . . its fifteenth season as a recognized major league body. Of the hurlers who made up the (original) pitching staffs . . . just three are in harness today (as major or minor league pitchers) . . . Edward Plank is the sole survivor (as a major league pitcher) of that grand old squad of hurlers . . . George D. Wiltse will manage . . . Joe McGinnity was . . . on the Pacific Coast . . .Cy Young is raising chickens down on the farm . . . Win Mercer, Bill Reidy, Virgil Garvin and Pete Dowling have passed over the Great Divide." - Sporting Life, June 10, 1916, about Eddie Plank's staying power, in an article titled Plank Survives Hurlers of Fifteen Years

After he retired from baseball, Plank returned to his native Gettysburg, where he operated a garage. He died there in 1926 at age 50 after suffering a stroke. He was elected to the Hall of Fame in 1946, 20 years after his death. He was inducted into the Gettysburg College Hall of Athletic Honor in 1978.

Plank's brother Ira Plank was a minor league pitcher, manager, and a college coach for 38 years.

"Plank was not the fastest, not the trickiest and not the possessor of the most stuff. He was just the greatest." Eddie Collins.

"Eddie was one of the smartest left-handed pitchers in baseball. He was master of the cross-fire delivery and that was one of his big assets." Connie Mack