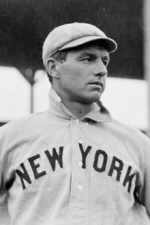 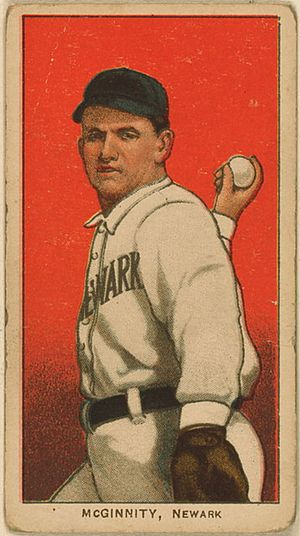 "Nothing can hurt my arm. I can throw curves like that all day. Last year, I pitched a 21-inning game for Peoria that took four hours. I never hurt my arm." - Joe McGinnity

"Iron Man" Joe McGinnity was known for a submarine style pitch that he claimed was easy on his arm. He pitched for ten seasons in the big leagues, starting in 1899 at age 28. His record was 246-142, and his best season was in 1904 for John McGraw's New York Giants, when he went 35-8 for a team that won the National League pennant with a record of 106-47.

McGinnity had pitched for six successful years in the minors before coming to major league baseball. He had also worked at an iron foundry, and one source says he got his nickname not from his iron arm but because he told people he worked at a foundry - "I'm an iron man."

He made a splash as a major league rookie by leading the National League in victories. In all, he led the league in wins five times in the period 1899-1906. He led the league in games pitched six times and even was the leader in saves three times.

He and Christy Mathewson were a remarkable pair of starters for the Giants from 1902 to 1908, with either Mathewson or McGinnity leading the league in wins each year from 1903-1908.

The similarity scores method shows the most similar pitchers as Clark Griffith and Stan Coveleski.

Following his retirement from the major leagues, Joe McGinnity continued to pitch at the minor league level. His last season came in 1925, when he was a 54-year-old pitcher for Dubuque (a team he also managed). He won 207 games in the minors after he left the majors, thus becoming the Hall of Fame pitcher with the most career minor league victories.

He also coached for the Brooklyn Robins in 1926.

He was a key part of the brouhaha occurring as part of the Merkle Bonehead Play. McGinnity was coaching at third base when the play occurred.

McGinnity is one of the few pitchers who has ever stolen home twice. [1]