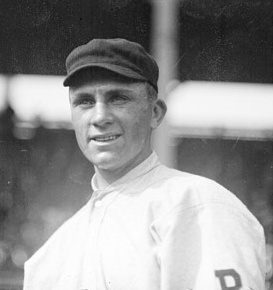 Stan Coveleski won at least 20 games in five of his 14 seasons in the American League. During a career in which he pitched for the Philadelphia Athletics, the Cleveland Indians, the Washington Senators, and the New York Yankees, Coveleski posted a record of 214 victories and 141 losses. He led the American League in strikeouts in 1920, in games started in 1921, and in earned run average and winning percentage in 1925.

The prime of his career was spent with the Indians, for whom he was a major factor in a 1920 World Series championship. Coveleski was credited with three of the four victories over the Brooklyn Robins, yielding only two runs in the 27 innings he worked. One of his other major accomplishments was a 13-game winning streak for Washington in 1925, when he finished at 20-5.

Born in the coal-mining town of Shamokin, PA, he was the younger brother of pitcher Harry Coveleski and one of four professional players in the family. By the age of 12, he was already working six days a week in the mine, putting in 12-hour days for a salary of $3.75 a week. Determined to escape life in the coal mines, Stan Coveleski signed his first professional contract with the Lancaster Red Roses, a minor league team managed by former outfielder Marty Hogan. In 1909, he helped that team secure its first championship in the Tri-State League.

The Coveleskis agreed never to play against each other, and their managers always arranged for them not to have to. The only games in which Harry and Stan both pitched was when one of the two came in to pitch in relief while his brother was on the mound. Stan was not a big man, standing 5'11" and weighing 166 lbs, but he was strong and durable. He also had good control, and never tried to be a strikeout pitcher, preferring to let the batter get himself out. That did not prevent him from leading the American League in strikeouts in 1920, but it was more a function of his pitching over 300 innings than of trying to overpower opponents.

He did not find immediate success in the majors. He was given a five-game trial by the Philadelphia Athletics in 1912 but failed to impress. He returned to the minor leagues and turned his career around with the Portland Beavers in 1915, where he learned to throw the spitball. He pitched 293 innings in 64 games that season, with a 2.67 ERA, prompting Cleveland to give him another look. This time, he was ready, In 1916, he walked only 58 batters in 232 innings, an excellent display of control for someone who threw the notoriously difficult to control spitball. Within a couple of years, he was considered the master of the pitch; his version was thrown high and looked destined to be a ball until it dipped into the strike zone at the last moment.

In 1917 and 1918, Coveleski pitched for an Indians team that was depleted by World War I. Star players Ed Klepfer, Joe Harris and Elmer Smith were all mobilized, leaving the Indians short of good players. That placed an additional burden on those who remained, including Coveleski. In a game that embodied the era, he pitched a 19-inning complete game against the New York Yankees on May 24th, winning 3-2 thanks to two home runs by RF Smokey Joe Wood. He seemed to suffer no particular ill effect from that marathon performance, taking his next turn in the rotation five days later then going on to pitch over 300 innings that year. He notched his first 20-win season in 1919 and won 24 in 1920 when the Indians won their first World Series title.

Coveleski retired as a player in 1928, after a 5-1 season with the Yankees, and settled in South Bend, IN, where the minor league ballpark of the South Bend Silver Hawks of the Midwest League is named Coveleski Stadium in his honor.

"The pressure never lets up. Doesn't matter what you did yesterday. . . Lord, baseball is a worrying thing." - Stan Coveleski