In the 1920 World Series, the Cleveland Indians beat the Brooklyn Dodgers, then known interchangeably as the Robins in reference to their manager Wilbert Robinson, in 7 games, five games to two. This series was a best-of-nine series, like the first World Series in 1903 and the World Series of 1919 and 1921. 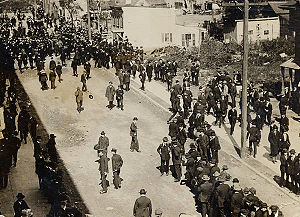 This Series is noted for the unassisted triple play turned by Cleveland's Bill Wambsganss in Game 5. Wambsganss, playing second base, caught a line drive off the bat of Clarence Mitchell, stepped on second base to put out Pete Kilduff, and tagged Otto Miller coming from first base. It was the second of fourteen (as of the end of 2007) unassisted triple plays in major-league baseball history, and it remains the only one in postseason play. The fifth game also saw the first grand slam in World Series history (hit by Cleveland's Elmer Smith) and the first Series home run by a pitcher (Cleveland's Jim Bagby, Sr.). And in that same game, Brooklyn outhit Cleveland but lost 8-1.

Cleveland had won the American League pennant in a close race with the Chicago White Sox and the New York Yankees. The Sox's participation in the Black Sox Scandal the previous year had caught up to them late in the season, and a number of their star players were suspended with 3 games left in the season, when they were in a virtual tie with the Indians. The Yankees, with their recently-acquired star Babe Ruth, were almost ready to start their eventual World Series dynasty. For Cleveland, it would prove to be one of their few successes in a long history of largely either poor or not-quite-good enough clubs.

This page is in need of some additional content. Please help the Bullpen by expanding it, or learn how to contribute.
Retrieved from "https://www.baseball-reference.com/bpv/index.php?title=1920_World_Series&oldid=1208045"
Categories:
Hidden category: