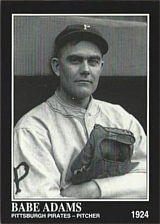 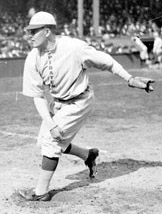 "I cannot explain my lasting much longer than many other pitchers on any other theory than this: I always take things easy, and I never worry. I discovered many years ago that when I exerted myself I was not so effective, for the mere effort of trying to be uncommonly good distracted my mind from the simple task of pitching." - Babe Adams, on Babe Adams Day, June 30, 1923 (quote from The Bill James Historical Abstract)

Known for his great control, Babe Adams remains among the top pitchers in Pittsburgh Pirates history nearly 100 years after his last pitch.

After cups of coffee with the St. Louis Cardinals in 1906 and the Pirates in 1907, Adams went 22-12 for the Louisville Colonels in 1908. He joined the Pittsburgh staff the next year and posted a 12-3 record with a 1.11 ERA while splitting time between the rotation and the bullpen as the Pirates won the pennant. As the World Series began, ace hurler Howie Camnitz fell ill, and manager Fred Clarke started Adams in his place in Game 1 to face the Detroit Tigers. The rookie responded by throwing a six-hit complete game victory and followed that up with complete game wins in Games 5 and 7 as the Pirates won their first championship. It would be 104 years until Pirates rookies grabbed three more postseason wins, two by Tim Wakefield in 1992 and one by Gerrit Cole in 2013; on the other hand, no Pirates rookie lost in the postseason until Cole fell in 2013.

Farmed out to the team with two names (St. Joseph/Hutchinson) in the Western League, it took a 20 win season there and a 14-3, 1.67 start with the Kansas City Blues to make it back. He returned to the Pirates in 1918 and won 17 games in both 1919 and 1920. In the latter season, he allowed just 18 walks in 263 innings and led the NL with 8 shutouts. Adams hung around for parts of each of the next six seasons, unable to put together the kind of numbers he saw in his heyday. His big league career ended ignominiously in August 1926, when he was released by the Bucs after joining a group of players in requesting that team vice president (and future Hall of Famer) Fred Clarke not be allowed to sit on the bench during games. Clarke was a vocal critic of manager Bill McKechnie and doing a lot of undermining of his work.

Adams ended his career at 194-140, 2.76 over nineteen seasons with an average of just 1.29 bases on balls per nine innings pitched. He later was a writer, covering local sports and also serving as a foreign correspondent during World War II. He died of throat cancer at the age of 86.