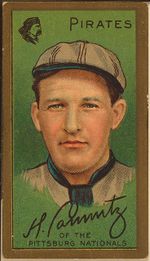 Pitcher Howie Camnitz won 133 games over 11 years in the majors, mostly with the Pittsburgh Pirates, and was a 20 game winner three times.

The older brother of big leaguer Harry Camnitz, Howie was nicknamed "Red" and "Rosebud" because of his red hair. Playing for the Vicksburg Hill Billies in 1903, he led the Cotton States League with 26 wins and 294 strikeouts. He began 1904 with the Pirates, going 1-4 with a 4.22 ERA in 10 games, but spent most of that year with the Springfield Hustlers of the Three I League. He won 39 games over the next two years with the Toledo Mud Hens of the American Association and rejoined the Pirates late in the 1906 season.

Camnitz won 13 games and recorded a 2.15 ERA for Pittsburgh in 1907 and improved to 16 victories and a 1.56 ERA the following year. He went 25-6 with a 1.62 ERA in 1909 and led the National League with a .806 winning percentage, as the Pirates won the pennant. He pitched miserably in the World Series, taking the loss in Game 2 and posting a 13.50 ERA in 2 appearances. Nonetheless, Pittsburgh won the Series. After going 12-13 in 1910, Camnitz bounced back with 20 win seasons the next two years. After going 6-17 for the Pirates in 1913, he was traded to the Philadelphia Phillies late that season. He jumped to the Pittsburgh Rebels of the Federal League in 1914 and played his final big league game the following year.