“I attribute my success to fate... Life is a funny game, and a little thing, almost a trifle, may make a splash in your affairs so big that the ripples from it will be felt as long as you live.” - Fred Clarke, to the New York Herald, 1911

"Are you going to take that?" - player-manager Fred Clarke, to a young Honus Wagner, who had been knocked around on the basepaths by the 19th century Baltimore Orioles, inducing Wagner the next time to blast right through fielders blocking his path 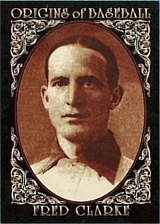 Hall of Famer Fred Clarke played 21 seasons in the majors, hitting .312 while stealing 509 bases in his career. He also managed for 19 seasons, leading the Pittsburgh Pirates to four National League pennants and a World Series crown. He was considered a tough competitor, an aggressive baserunner, and a manager who communicated a positive attitude to his players.

Born and raised in Iowa, Clarke began his pro career as a 19-year-old and hit .311 in 54 games with the Savannah Modocs of the Southern Association in 1894. He was soon spotted and acquired by the Louisville Colonels of the National League. He made his major league debut on June 30th of that year, going 5-for-5 in a loss to the Philadelphia Phillies. In 76 games for Louisville, he hit .274 and would be a regular in the bigs for nearly the next twenty years. In the middle of the 1897 season, Colonels owner Barney Dreyfuss named Clarke the team's manager at age 24. He hit .390/.461/.530 that summer with 122 runs scored, but the club finished 11th in the 12 team NL.

The National League downsized to 8 teams in 1900, and Louisville was one of the teams that did not survive. Owner Dreyfuss had purchased a stake in the Pittsburgh Pirates in the interim and took Clarke plus all of the team's stars with him, including Honus Wagner, Deacon Phillippe, and Rube Waddell. Fully fortified with talent, Clarke led Pittsburgh to a second place finish in his first year on the Allegheny. The Pirates captured the NL pennant in 1901 and repeated as champs in 1902. Despite losing star pitchers Jack Chesbro and Jesse Tannehill to the upstart American League in 1903, he led the club to a third straight National League title, hitting .351/.414/.532 to support his own cause while leading the league in slugging percentage and doubles (32). That fall, the Pirates fell to the Boston Americans in the inaugural World Series in 8 games.

The Pirates continued to post winning records throughout the first decade of the 1900s, but Clarke's performance declined somewhat once he hit his 30s. He did hit .309/.371/.412 in 1906, while leading the NL with 13 triples. Pittsburgh again reached the World Series in 1909, facing Ty Cobb and the Detroit Tigers, and came out victorious in seven games, Clarke belting 2 home runs with 7 RBI. Cap hit .324 as a 38-year-old in 1911, but after that season played sparingly. He remained the Pirates skipper through the 1915 season, after which he retired. He later returned to the club as a coach in 1925 and 1926.

Although a worthy Hall of Famer, Clarke's career was overshadowed by that of his prized player, Honus Wagner, who was his teammate almost his entire career: 1897 until 1915. Clarke rarely led the league in offensive categories, partially because Wagner was doing it a lot. He never led the league in batting, but he was second twice, once behind Wagner, and once behind Willie Keeler. Clarke's 160 point score on the Gray Ink test shows that he was frequently in the top ten in the league. The most similar player to Clarke is George Van Haltren, not a Hall of Famer. Seven of the ten most similar players are in the Hall, with the most similar Hall of Famer being his contemporary, Jesse Burkett.

Clarke's brother, Josh, was his teammate at one point, and he was also the brother-in-law of Chick Fraser. His first baseball card appearance was the 1903 E107 Breisch Williams.