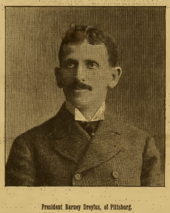 Barney Dreyfuss owned the Pittsburgh Pirates from 1900 to 1932. He also had owned the Louisville Colonels; when the National League shrank from 12 teams to 8 in 1900, he moved most of the Louisville stars to Pittsburgh, including Honus Wagner, Fred Clarke, Deacon Phillippe and Rube Waddell, thus forming the first powerhouse team of the 20th Century.

He played an instrumental role in fostering peace between the National League and the upstart American League in 1903 when he agreed to have his Pirates play the AL Champions, the Boston Americans in what became the first World Series.

He was voted into the Hall of Fame in 2007 and inducted the following summer.