Inducted into Hall of Fame in 1936

"He was the nearest thing to a perfect player no matter where his manager chose to play him." - John McGraw

" . . . there is no one who has ever played the game that I would be more anxious to have on a baseball team." - Bill James

"When Pittsburgh had infield or batting practice, we just sat on the bench to watch Wagner's every move. He was the best." - Chief Meyers

"The greatest ball player of all time." - John McGraw, talking about Honus Wagner

Honus Wagner resides near the top of the Hall of Fame. Bill James once picked him as the # 2 player of all time behind Babe Ruth, and Wagner ranks # 4 all time by the Gray Ink test of measuring performance. On top of his hitting and base-stealing talents, he had great range at shortstop and played several other positions as well.

Hans was born in Mansfield, PA, now Carnegie, PA on February 24, 1874, and was twenty years old when Ed Barrow, manager of the Paterson club of the Atlantic League, sold him for $2,100 to Barney Dreyfuss, then owner of the Louisville Colonels. Harry Pulliam, former president of the National League and then secretary of the Louisville club, put through the deal. Pulliam bid $100 more than was offered by Pittsburgh. So the player was knocked down to Louisville. Pittsburgh, however, was destined to get the famous star three years later when Dreyfuss purchased the Pirate franchise.

Although famous as a shortstop, Wagner did not play a single game at the position during his first four years in the majors. In 1901, however, Bones Ely struggled at shortstop and was released in July. Wagner played 61 games at the position that year, and although he split his time in 1902 between outfield and shortstop, became a shortstop after that. 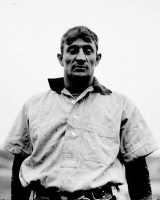 It is quite possible that Honus Wagner was one of the most complete players of all time. His name is often evoked in conversations about the best players ever.

During the Deadball Era, home runs were much more of a rarity than they are today. It was not uncommon for totals of somewhere around ten to top the league. In fact, Wagner's diminutive teammate Tommy Leach led the National League in this category in 1902 with a whopping 6 (it must be remembered that many ballparks had capacious dimensions with a few centerfield walls more than 500 feet from home plate). Therefore, using four-base hits as the standard to determine the slugging ability of players from this period would be inaccurate and unfair. This leaves us with two other yardsticks with which to measure a player's power: slugging average and triples.

Wagner led the league in slugging six times and, as already mentioned, he has the third highest tally of three-baggers in history. It is fair to say that, when one puts these data into context, Wagner was probably the premier power hitter of his league for much of his career.

His speed cannot be ignored, for he was the NL's top base thief five times. One must also take his consistently high batting averages into consideration, as he finished with a .327 career mark.

And, defensively, he played almost everywhere several times (including two appearances on the mound) with decent results, so it must be said that he was a very versatile fielder. His range was above average and he possessed a strong arm. Honus Wagner was a true five-tool player.

He was the most dominant player of his era, winning a NL record 8 batting titles (since tied by Tony Gwynn).

He played in two World Series, the 1903 Series against the Boston Americans, and the 1909 Classic, in which he battled Ty Cobb's Detroit Tigers head on and bested the "Georgia Peach" in most offensive categories. He had the distinction of collecting the first-ever RBI in a World Series, driving in teammate Tommy Leach from third base with a single off Cy Young in the 1st inning of Game 1 of the 1903 Series; he also collected the Series' first stolen base a few moments later.

Off the diamond, Honus was remembered as a humble and down-to-earth person, patiently coaching youngsters for the Pirates well into old age. He was more commonly called Hans Wagner while playing. During his career he was sometimes called Johannes, German for John, which was shortened to Honus. He is the brother of Butts Wagner.

He wore no uniform number during his playing career, but usually wore No. 33 as a Pirates coach in the 1920s and 1930s. His number was the first retired by Pittsburgh, in 1952.

In 1936 he was voted, deservedly, as an inaugural member of Baseball's Hall of Fame, trailing only Cobb in the voting. John McGraw, possibly baseball's smartest and craftiest manager, called Wagner the best player he ever saw.

(The following information is from the 1924 publication of The Baseball Bat Bag):

"Wagner could do everything as well as anybody who ever played baseball, hit, run and field, and he knew his baseball," said McGraw.

Spectacular and brilliant as Cobb is, he is no greater than Wagner. Sisler may be as great over a span of years, Ruth, a special in home run hitting, cannot be compared with Wagner as an all-round player.

John Henry played 2785 games, went to bat 10,426 times, scored 1740 runs and whacked out 3430 hits for a total of 4880 bases, all of them marks which have been approached by no other big leaguer. It was a big disappointment to Wagner that he couldn’t wind up his career by hitting for an even 5,000 bases. He missed it only by twenty.

Wagner was the only player who ever led the National League batsmen four years in succession, and the only man who ever led it eight times. Cap Anson and Dan Brouthers each of whom led the parent major circuit four times, are Wagner's nearest rivals.

Like Sam Crawford, Hans was a barber and handy man in his early days, so they let him serve as a handy man on his different ball clubs. He broke in as an outfielder, and played most every position but the batteries before Fred Clarke located him permanently at short in Pittsburgh. During his 21 years in the National League, he had the splendid fielding average of .944. To show the volume of business Wagner transacted from day to day, he made 6520 putouts, 6390 assists and 720 errors, a total of 13,630 chances.

Despite his weight and clumsy appearance, he was one of the game's greatest base-runners. He stole a total of 720 bases, his best mark being 61 in 1907.

Wagner served as a major league manager for only five games (in 1917, the same year that he finished up his playing career). He did not want the job, but took over the last=place club for a few days after the firing of Nixey Callahan while owner Dreyfuss settled on a more permanent replacement (it was to be Hugo Bezdek, who was better known as a college football coach). However, he was a coach for far longer. In 1932, he tried but was unable to win the job as manager of the Cincinnati Reds, and so turned to coaching with the Pirates. He was a high-profile coach who was very popular with the fans. He retired many years later in 1952. Early in his coaching tenure, he tutored the young Arky Vaughan in defense, and later was around to help Ralph Kiner.

Honus also served as head coach at Carnegie Institute of Technology, and in addition was basketball coach there. In 1928, he ran for sheriff for Allegheny County, but lost in a landslide.

He appeared in at least one movie, a short film dating to about 1909 which was at some point released under the title Spring Fever. He appears as himself, teaching a young boy how to hit; the boy is played by one Moe Horwitz, who would go on to achieve fame as Moe Howard, member of the comedic trio "the Three Stooges". All prints of this film have been lost, but some lobby cards (i.e promotional postcards) dated 1919 have survived. He likely appeared in other short films that have been lost as well.

An Ode to Old Hans Wagner[edit]

Sporting Life of March 25, 1916 stated that Wagner had led National League shortstops in fielding in 1915, and printed a poem written by H.J. Flatley, the last stanza of which reads as follows:

But Hans comes back with each passing season,

though some of the youngsters who fight him do not.

And for the return there's a might good reason.

For Hans always sticks with the leaders of swat.

His legs may be bent and his arms racked and strained

And at times he succumbs to fatigue,

But in records his presence is always explained

By the words "Hans again leads the League".

One of Wagner's baseball cards is exceedingly rare and was made even more valuable when hockey star Wayne Gretzky purchased it. Later, the T206 Honus Wagner sold at an eBay auction for a record $1.265 Million. His first Baseball Card appearance was on the 1903 E107 Breisch Williams.