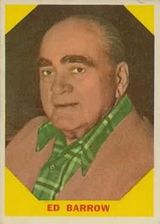 Ed Barrow managed the Paterson Silk Weavers of the 1896 Atlantic League and is credited with discovering Honus Wagner that year. He then was president of the Atlantic League for the next three years.

In 1900, Barrow became manager of the Toronto Maple Leafs of the Eastern League. The club finished second in 1901 and won the EL pennant the next season.

He got his first chance at managing in the major leagues with the Detroit Tigers during the 1903 and 1904 seasons, when the team finished 5th and 7th respectively. In 1905, he went to the Indianapolis Indians to manage and guided the club to a 69-83, 6th-place finish. Back with Toronto in 1906, he piloted the team to last at 46-88. After three years away from the bench, he managed the Montreal Royals in the 1910 EL to 5th place at 71-80.

From 1912-1917, Barrow was president of the EL (now known as the International League). During that time, he led two attempts to turn the League into a third major league, first as a competitor to the Federal League, then on its own. His plan included taking the four strongest Eastern league franchises - Baltimore, Buffalo, Toronto and Newark - and combining them with four franchises form the American Association. Both plans failed because Barrow did not obtain the prior support of Major League owners, and team owners from cities in the Eastern League and American Association which would have been left out of the proposed Union League of which Barriow would have been president. The league was struggling to survive during those years, with two of its franchises - Jersey City and Newark - having gone into receivership in 1915 and being run by Barrow himself in the interim. At the end of 1917, league owners, upset with Barrow's plans, voted to cut down his salary, at which point Barrow resigned his position.

He was made the manager of the Boston Red Sox in 1918. He won the World Series in his first year with the Red Sox, but managed the team only two more years as owner Harry Frazee began selling the contracts of star players. He is credited for the momentous decision to turn left-handed pitcher Babe Ruth into an outfielder.

Ed then served as General Manager of the Yankees from 1921 to 1944, during which the team emerged as the powerhouse in Major League Baseball. Barrow was active in establishing one of the strongest farm systems in baseball during this period.

Barrow was elected to the Baseball Hall of Fame on January 21, 1953 by the Committee on Baseball Veterans. He died later that year in Port Chester, NY at age 85. Ed Barrow is interred in Kensico Cemetery in Valhalla, Westchester County, New York.

On April 15, 1954, the Yankees dedicated a plaque to Barrow, which first hung on the center field wall at Yankee Stadium, near the flagpole and the monuments to Babe Ruth, Lou Gehrig and Miller Huggins, and later in the Stadium's Monument Park. The plaque called him "Moulder of a tradition of victory."