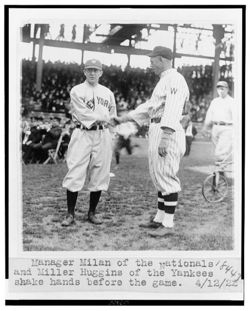 ''When Miller Huggins took over as the New York Yankees’ manager in 1918, he assumed a struggling ball club . . . By the time Huggins passed away in 1929, the Yankees were well on their way toward becoming the most dominant baseball franchise of the 20th century." - from the Hall of Fame web page about Miller Huggins the manager

Legendary manager Miller Huggins was an above-average player but much more famous as a manager. He managed two major league teams - first the St. Louis Cardinals where he managed the young Rogers Hornsby and then the New York Yankees where he managed Babe Ruth, Lou Gehrig and other famous Yanks.

Huggins was already playing minor league ball during college, and was with St. Paul for several years. He came to the majors in 1904 when he was 26 years old, spending his first six seasons with the Cincinnati Reds and his last seven with the St. Louis Cardinals, some as player-manager.

Huggins specialized in drawing walks, leading the league four times during his career. Since it was the dead-ball era, his batting average and walks usually put him among the league leaders in on-base percentage. He also stole over 300 bases in his major league career.

Huggins never won a pennant as manager of the Cardinals, but he won six with the Yankees, including the one with the famous 1927 team, considered by many to have been the best team of all time. His teams won the World Series in 1923, 1927 and 1928.

He was also a lawyer. Due to illness, he stepped down as skipper of the New York Yankees on September 20, 1929. Five days later, he died of a rare skin infection at age 51. After his death, it was revealed that he had been a part-owner of the minor league St. Paul Saints while managing the Yankees, with his close friend, former Cardinals and Yankees scout Bob Connery being the principal owner. It is notable because the Yankees used the Saints as a quasi-farm team during those years, and that Huggings would personally benefit whenever the Yanks bought a player from St. Paul.

His first Baseball Card appearance was in the 1906 WG-3 Fan Craze set.

"We had a few battles, but there was no man I liked better in baseball. Whatever he said to me was for my own good." - Babe Ruth