The 1922 New York Yankees played their 20th season in New York and their 22nd overall. They finished with a record of 94 wins and 60 losses, to win the second pennant in franchise history, by a single game over the St. Louis Browns. New York was managed by Miller Huggins. Home games were played at the Polo Grounds.

The Yankees started the season without their star, Babe Ruth, who was serving a suspension due to breaking the rule (along with several other Yankees) against World Series participants barnstorming. Although Commissioner Kenesaw Mountain Landis refused to back down on his enforcement of the rule, he did repeal the seemingly absurd rule by the end of the 1922 season. The Yankees clinched the pennant thanks to an eventful three-game series against the Browns played in St. Louis September 16-18. The Yankees arrived in St. Louis leading by a half-game, won the first game, 2-1, thanks to a stellar performance by Bob Shawkey (20-12, 2.91) against former Yankee Urban Shocker. In that game, centerfielder Whitey Witt (.297, 98 runs scored) was knocked unconscious when hit in the forehead by a glass bottle thrown by a Browns' fan. He recovered to hit the game-winning hit in the 9th inning of the third game (after the Browns won the second), as Joe Bush (26-7, 3.31) earned the win. The Browns never recovered from the series' loss, and the Yankees managed to hang on to first place for their remaining 10 games.

In the 1922 World Series, the Yankees again lost to their landlords, the New York Giants, 4 games to none with one tied game. The final game of the Series was also the Yankees' final game as a tenant in the Polo Grounds. During the season, they had begun construction of their new home, Yankee Stadium, which would open in 1923. 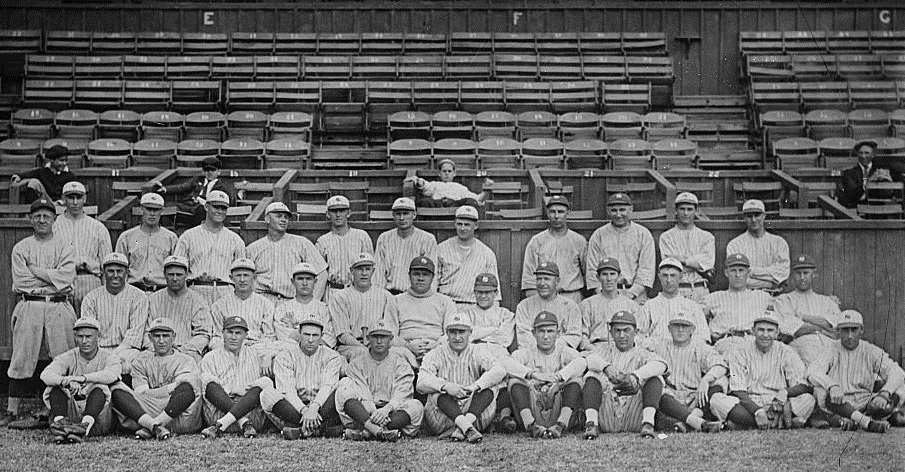