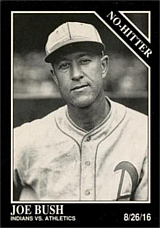 "Joe Bush has been a character as well as a great pitcher. Joe has a peculiar smile. It is one of great friendliness. It is a guileless one, a disarming one, and many a rookie has discovered that Joe Bush is the greatest kidder and practical joker in the world and yet has lived to forgive Joe because of that smile." - The New York Times, July 4, 1927 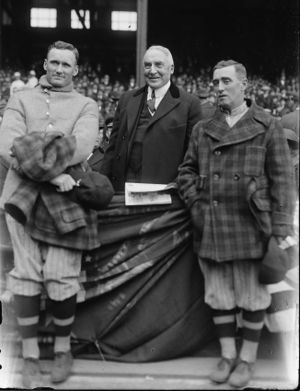 Credited as an early practitioner of the forkball, "Bullet" Joe Bush pitched seventeen seasons in the big leagues, winning 196 games and spinning a no-hitter.

Bush reached the major leagues with a cameo in 1912 for the Philadelphia Athletics, settling in the next two seasons to rack up 32 wins as the A's marched to back-to-back American League pennants, winning the World Series in 1913 while faltering to the "miracle" Boston Braves the following year. In 1912, he was the first pitcher in history to log at least 90 innings both am a starter and in relief, as he went 15-6 in 39 games, 16 of them starts, with a 3.89 ERA. He was the first of only 8 pitchers to become a member of that obscure small club. He also pitched over 4 innings per relief outing that year, which is a record.

He was one of the few men not sold off en masse in Connie Mack's fire sale that followed the 1914 season, enduring some tough win-loss records while limiting damage through 1917. In 1916, Joe led the AL in losses, finishing 15-24 with a robust 2.57 ERA and 157 strikeouts (but 135 walks) as the A's finished a pathetic 33-117. On August 26 of that season, one day after losing a 10-2 ballgame as part of a doubleheader to the Cleveland Indians, Joe marched right back to the mound at Shibe Park and no-hit the Tribe, allowing only a walk to lead-off hitter Jack Graney while striking out 7 for a 5-0 victory. Following an 11-17, 2.47 record in 1917, it was Joe's time to be dealt out of Philly, moving with Amos Strunk and Wally Schang to the Boston Red Sox for three players and $60,000.

The move to Boston earned Bush a second World Series ring only for his arm to give out the next season. Per a Saturday Evening Post series, Joe claimed that, unable to go to a curveball anymore, he developed the forkball in an effort to continue his career. He responded with a tough luck 15-15, 4.25 season in 1920, then a 16-9, 3.50 season in 1921. Harry Frazee flipped Joe, as part of a deal for sweet delicious cash ($100,000) and the ability to unload some veterans (Everett Scott and Sad Sam Jones along with Joe), to the New York Yankees in December 1921. He was rewarded with his finest season in terms of wins and losses, going 26-7 with a 3.31 ERA while finishing fourth in the MVP vote. He made a fourth trip to the World Series, a loss to John McGraw's New York Giants. Joe racked up two more solid seasons with the Yanks, earning a third World Series ring in 1923, before moving to the St. Louis Browns in a massive moving parts deal, logging 14 wins but 14 losses and a 5.09 ERA in 1925. Bush spent his final three seasons drifting among five teams, with an encore back with the A's dropping the curtain on his big league career in 1928.

Joe stuck around briefly in baseball after playing, managing the 1930 Allentown Dukes and 1931 Allentown Buffaloes. He died in Fort Lauderdale at the age of 81.