"Wally Schang, the kid catcher of the Athletics, will go down into history as the sensation of the 1913 world's series." - from an article in the November 2, 1913 New York Times

The brother of big leaguer Bobby Schang, Wally Schang was in six World Series and five times placed in the top 20 in MVP voting during 19 years in the big leagues. Known as both a good hitter and also a good defensive catcher, he was often among the leaders in on-base percentage and hit-by-pitch.

Schang began his pro career with the Buffalo Bisons of the American Association in 1912 and was selected by the Philadelphia Athletics in the 1912 Rule V Draft that offseason. He broke into the majors with the Athletics in 1913 at the time of the $100,000 infield, and in that autumn's World Series, he hit .357, clubbed a home run, and slugged .714. Spending five years with the A's, he played catcher and also third base and outfield while manager Connie Mack dismantled the team, which tumbled from first to last. During most of his time with Philadelphia, he was a strong hitter, usually posting OPS+ scores close to 140. In 1915, he set a record behind the plate by gunning down six attempted stolen bases in a game. On September 8, 1916, he became the first switch-hitter in major league history to homer from both sides of the plate in the same game.

After the 1917 season, Schang was traded to the Boston Red Sox. He played catcher and infield on a team that also featured Babe Ruth as a pitcher and which won the 1918 World Series. Schang hit .444 in the Series. With the Red Sox from 1918 to 1920, he twice in that period had OPS+ scores over 130. 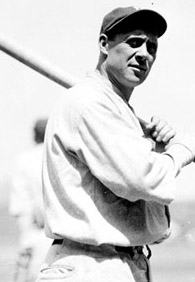 Schang was dealt to the New York Yankees a year after Ruth joined the club, and he spent five years with them. At this point past the age of 30, he didn't hit as well as before, but was above average as a hitter most of his time with the Yanks and in two of the three World Series in which he appeared with the team. His last year with them was Lou Gehrig's rookie year, 1925. The Yankees felt he was getting too old for the job at that point, and had young Benny Bengough to replace him, but in fact he had several more years to go as a quality major league backstop.

By 1926, Schang was 36 years old. The Yanks traded him to the St. Louis Browns and he had one more excellent year, hitting .330 and slugging over .500. The next two years were also well above average, but after his performance dropped a bit in 1929 at age 39, he was traded. He returned to the A's, a team which was still managed by Connie Mack. After a year with the A's, he went to the 1931 Detroit Tigers for his last major league season. He was seven years older than the Tigers' player-manager, Bucky Harris.

Although the large majority of his major league games were spent at catcher (1,435 games out of 1,663 total), Schang is listed as the regular third baseman for the 1915 Athletics and a regular outfielder for the 1916 Athletics, years in which he also played some catcher.

Following his playing career, Schang was a Cleveland Indians coach from 1936 to 1938. He also continued to play in the minors as a player-manager for many years after his major league career. After baseball, he ran a farm for 20 years.