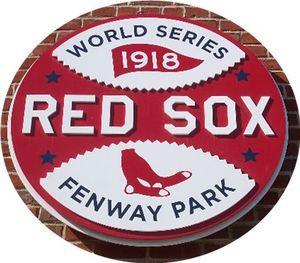 The Boston Red Sox defeated the Chicago Cubs 4-2 in the 1918 World Series. Starting pitchers Babe Ruth and Carl Mays accounted for all the Red Sox wins in the series, winning two games each. The Cubs played their home games in Comiskey Park. Ruth pitched a complete game shutout in Game 1.

The series was played earlier than any other in history, as the 1918 season was ended early because of World War I. It was also played as the country was reeling from an influenza pandemic that would claim millions of lives around the world.

Drastic reductions in the World Series shares for both winning and losing teams were announced just prior to the series, causing both teams to threaten to go on strike before Game 5 if they were not paid larger shares. After the series, the Red Sox's championship emblems (similar to World Series rings today) were withheld as retribution for the players' actions. Notably American League President Ban Johnson held Harry Frazee accountable for the dispute as he felt the Red Sox owner was disloyal to the other AL owners and their efforts to lower player salaries during World War I. The War also caused the 1918 season to end early, and thus the starting date for the World Series was the earliest in history: September 5th.

Today, the 1918 World Series is chiefly remembered as the last won by the Red Sox until 2004. It is also the last World Series in which no home runs were hit.

Game 1 went to the Red Sox, 1-0, with Babe Ruth pitching the shutout before 19,274 fans. Stuffy McInnis knocked in the game's only run, driving in Dave Shean with a fourth-inning single off Hippo Vaughn.

During the seventh-inning stretch, the Star-Spangled Banner was played by a band, its first performance at a World Series game. It would only be played at every major league game during World War II, but the tradition of playing it at every World Series game began with that game.

The Cubs rebounded to knot the Series with a 3-1 victory in Game 2 the next day, behind Lefty Tyler's six-hit pitching. Tyler himself had a two-run single in the second inning to make the score 3-0, and he carried a shutout into the ninth inning.

The series remained in Chicago for Game 3 due to wartime restrictions on travel. On September 7, the Red Sox emerged victorious, 2-1, as Carl Mays scattered seven hits. Wally Schang and Everett Scott had back-to-back RBI singles in the fourth inning. Vaughn lost his second game of the series.

Sunday the 8th was a travel day. The teams arrived in Boston on September 9, and the Cubs tied Game 4 in the eighth inning, breaking Ruth's World Series scoreless inning streak (going back to 1916) at 29 2/3 on hits by Charlie Hollocher and Les Mann. But the Red Sox won it in the home half of the inning on a passed ball by Killefer and a wild throw by relief pitcher Phil Douglas scoring Schang for a 3-2 victory and a 3-1 series lead.

Starting pitcher Babe Ruth batted sixth for the Red Sox in Game 4. He remains the only starting pitcher in World Series history to bat other than ninth in the batting order.

Vaughn finally earned a Series victory on Tuesday in Game 5, tossing a five-hit shutout as the Cubs rallied back for a 3-0 victory. Dode Paskert's two-run double in the eighth sealed the matter for the Chicagoans, after Mann had knocked in a first-inning run.

Attendance for Game 6 at Fenway on Wednesday, September 11, was down from over 24,000 on Tuesday to a mere 15,238, but the Red Sox went home happy. Max Flack committed a third-inning error that allowed two Sox runs to score, and the Red Sox held on for a 2-1 victory and the World's Championship of 1918, as Carl Mays won his second game of the series.

This page is in need of some additional content. Please help the Bullpen by expanding it, or learn how to contribute.
Retrieved from "https://www.baseball-reference.com/bpv/index.php?title=1918_World_Series&oldid=1197028"
Categories:
Hidden category: