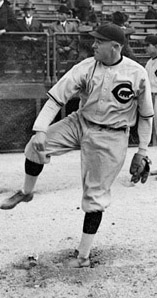 While pitching for the Chicago Whales of the Federal League, Claude Hendrix threw a no-hitter against Pittsburgh in May 1915.

Hendrix agreed to throw a game in August 1920 and was subsequently banned from baseball. He did not actually take the mound. The Chicago Cubs, suspecting wrong-doing, substituted Grover Cleveland Alexander for Hendrix at the last minute. What makes his behavior odd was the fact that his father was a town sheriff and bank president on the Kansas frontier in the late 19th century.

Following his involuntary departure from baseball, Hendrix owned and operated a café in Allentown, Pennsylvania, for many years.