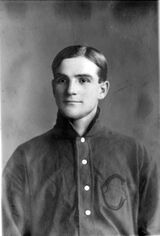 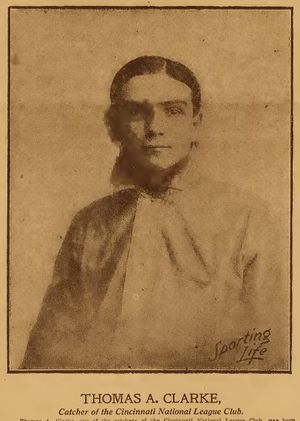 "Thomas A. Clarke one of the catchers of the Cincinnati National League Club, was born in Harlem, New York City, May 9, 1888. He started playing ball on Public School No.43's team in 1901. His battery partner being Sammy Smith, who was with Clarke in Montreal and who was with him for a short time in Cincinnati last year. Clarke later caught for the Bradhurst A. C., the Avonia A. C., and the All-Nationals. He joined the Montreal Club in July, 1907, and would have been with the Royals a year earlier if his parents had not objected to his playing professional ball. Manager Clark Griffith, then with the New York Americans, recommended Clarke to the Montreal Club, the "Old Fox" having had Clarke practicing on the hilltop and then discerning his worth. Clarke was bought by the Cincinnati Club Fall of 1908 for $2,500, and has been a member of the Cincinnati team since, having measured up to major league calibre." - Sporting Life, September 10, 1910

[[Catcher Tommy Clarke played parts of ten seasons in the big league, with all but one game coming as a member of the Cincinnati Reds. He was the team's regular backstop twice, from 1913 to 1914, and batted .265 in 700 career games. Clarke was suspended late in the 1915 season for violating a clause in his contract which prohibited him from drinking. According to the Cincinnati Enquirer, Clarke said he would get manager Buck Herzog for that. The Enquirer reported that Herzog "said he'd meet him Sunday night after the last game at any time, any place and any circumstance and battle it out." After his playing career ended, Tommy was a New York Giants coach for several seasons from 1932 to 1935 and in 1938, enjoying a world championship season in 1933.