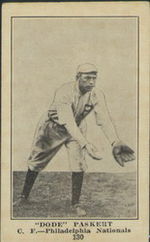 Paskert is not listed as playing for the 1922 Kansas City Blues, but he appeared in at least one game on April 12th, the American Association Season Opener, for the Blues against the Toledo Mud Hens at Toledo's Swayne Field. He played left field, batted second, and is credited with one hit, a single, in five at-bats. He made no assists or errors, and was not credited with a putout.

For some reason, the similarity scores method picks mostly players who didn't hit as well as Paskert, except for John Titus who hit better. Paskert and Titus were teammates in 1911 and 1912 for the Philadelphia Phillies.

Paskert was highly-respected for his defensive abilities in center field.

As a teen, he played for the same neighborhood club as Jimmy Austin.

In 1907, before coming to the majors, he played on a league-championship Atlanta Crackers club, leading the Southern Association with 6 homers. The team, and Paskert, made the cover of a 1908 Sporting Life issue on March 28th.