The 1908 World Series matched the defending champion Chicago Cubs against the Detroit Tigers in a rematch of the 1907 Series. In this first-ever rematch of this young event, the Cubs won in 5 games for their second consecutive title.

1908 was the year of the infamous "Merkle Boner" play that allowed the Cubs to reach the World Series after beating the New York Giants in a one-game "playoff", actually the makeup game for the tie that the Merkle play had caused.

The Series was anti-climactic after tight pennant races in both leagues. Ty Cobb had a much better Series than in 1907, as did the rest of his team. The final two games, in Detroit, were shutouts. This was also the most poorly attended Series in history, with the final game drawing a record-low 6,210 fans. Attendance in Chicago was harmed by a ticket-scalping scheme that fans accused the club's owner of participating in, and the Series was boycotted to some degree.


For the first time, four umpires were used in the series, in alternating two-man teams.

The attendance during Game 5 (6,210) was the smallest World Series crowd in history. 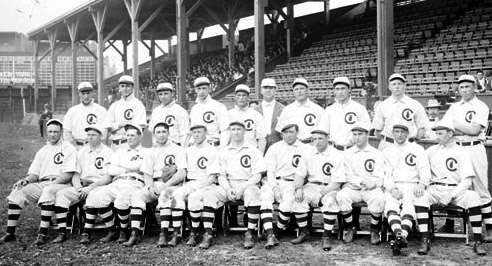 The 1908 World Champion Chicago Cubs at West Side Grounds