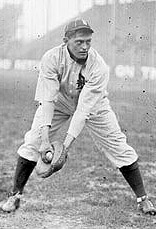 Boss Schmidt, from London, AR, played six years in the majors and 16 in the minors, primarily as a catcher. Schmidt appeared in the 1907, 1908 and 1909 World Series with the Detroit Tigers. He also managed at least nine years.

In perhaps his best year with the bat, 1908, he hit .265 in a league which hit only .239. In contrast to most of the catchers of the 1900s, he was known primarily for his bat and not for his glove; he was eventually replaced by Oscar Stanage, a more typical "defense-first" catcher. He made a key mistake in Game 1 of the 1907 World Series, pitting the Tigers against the Chicago Cubs: with Detroit leading 3-2 with 2 outs and the bases loaded in the bottom of the 9th, he dropped the third strike pitch by Wild Bill Donovan to Del Howard, allowing Harry Steinfeldt to score the tying run. Schmidt was charged with an error on the play, and the game ended up as a 12-inning tie as neither team scored again before darkness ended the game. The Cubs stole seven bases during the game, and Schmidt committed another error on a wild throw, so it was an all-around woeful performance.

He tried pugilism during the off-season between 1910-1911, and according to the New York Times of March 18, 1911, was successful. However, he decided that baseball was more his style, and came back to Detroit.

He was part of the gang that picked on Ty Cobb in his rookie year; he broke Cobb's nose in a fight. Things got so heated that the Tigers were thinking of separating the two, and even received offers from other teams to take Cobb from their hands, before thinking better of it.

He umpired a total of 3 American League games in 1906 and 1907. His brother Walter Schmidt was also a major league catcher.