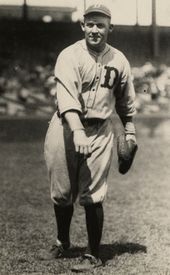 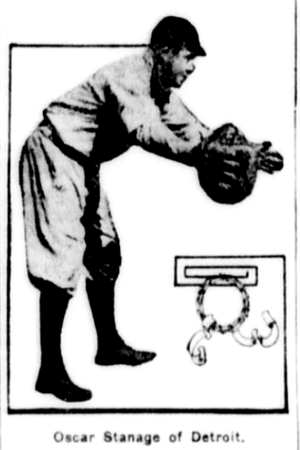 Catcher Oscar Stanage had a long career on the Detroit Tigers as a teammate of Ty Cobb. While he was not a great hitter, he was esteemed for his defense. He was also the most durable catcher in the American League during his heyday, leading all other catchers by over 100 games for most games caught from 1911 to 1915. His 141 games caught in 1911 were the most by any catcher in the first two decades of the league's existence. He also holds the league record for assists with 212 that year, and compiled another 190 in 1914.

Stanage was born on a ranch in Tulare, CA and attended Stockton High School where he also played football. After his graduation in 1905, he signed with a local independent team. He still managed to catch the attention of the St. Louis Cardinals, who signed him to a contract in 1906, then immediately traded him to the Cincinnati Reds for pitcher Carl Druhot. He got into one game for the Reds before being sent to the Newark Sailors of the Eastern League. He was a good-field, no-hit catcher for three seasons there until his contract was purchased by the Detroit Tigers in August 1908.

The Tigers' catcher at the time was Boss Schmidt, a strong character who tried his hand at boxing in the off-seasons with some success and remains famous as one of Ty Cobb's chief tormentors when he first joined the team. However, he also had a defensive meltdown in the 1907 World Series, which the Tigers lost to the Chicago Cubs, which explains the attraction that an excellent defensive catcher like Stanage would hold for manager Hughie Jennings. Stanage would pick up the reputation of being peerless at guessing when his opponents put on the hit-and-run or the squeeze, had a great throwing arm, and was outstanding at working with pitchers. Still, he needed to wait until 1909 to play his first game for the team, eventually platooning with Schmidt as the Tigers won their third consecutive pennant. He played in 77 games, hit .262 with 8 doubles and 6 triples, and generally outplayed the veteran Schmidt, whose own batting average was only .209 in 84 games. Still, the veteran started 5 of the 7 games in the World Series which Detroit lost to the Pittsburgh Pirates, while Stanage went 1 for 5 with 2 RBI in his two starts.

Oscar Stanage fell to batting .207 in 1910, playing 88 games, then became the full-time starter and began setting durability records in 1911, while batting .264 and driving in 51 runs. He played in 121 games in 1912, hitting .261, but the Tigers gradually fell back in the standings over that period, as their pitching was no match for their strong hitting. For his part, Stanage began to suffer the effects of his intensive use, seeing his average fall to .224 in 1913; it would remain below .240 until 1918, by which time he was a part-time player. Starting in 1914, he was the Tigers' pitching coach while still their regular catcher. He was a quiet but highly-respected member of the team's clubhouse; in 1912, he told Cobb, who was razzing rookie third baseman Ossie Vitt, that he would punch him "so hard it would drive him back to Georgia" if he didn't lay off the youngster.

Stanage missed considerable playing time with a broken finger in 1918, then played only 39 games in 1919. He wanted to retire at that point but was convinced to return for one more season in 1920, in which he hit .231 in 78 games. He was then sent close to home to the Los Angeles Angels of the Pacific Coast League, joining former teammate Sam Crawford. He played for the Sacramento Senators in 1922, then was traded to the Salt Lake City Bees for the 1923 season, but chose to remain closer to home with the Visalia Pirates of the independent San Joaquin Valley League. In 1924, he played for the Toronto Maple Leafs of the International League.

In 1925, he became a coach under manager Cobb, and also got into 3 games at age 42. But he wasn't finished yet as a player: in 1926, he was player-manager for the Evansville Hubs of the Three-I League. He returned to the major leagues as a coach with the Pittsburgh Pirates from 1927 to 1931, under former teammate Donie Bush. He then retired from baseball for good. He moved to Detroit where he was a night watchman near the site of Tiger Stadium. He died on November 11, 1964 in the midst of a general strike by Detroit newspapers, and as a result his death received almost no coverage. He was married twice, the second time in 1952 and had four children from his first marriage.

With 1093 games played as a member of the Detroit Tigers, Oscar Stanage ranks third all-time among their catchers, after Bill Freehan and Lance Parrish, although his .234 career batting average and 8 home runs rank lowest among all Tigers to have played 1000 or more games. His eight career home runs are one less than his teammate Bush.