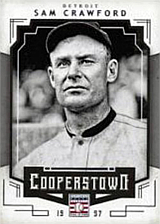 Inducted into Hall of Fame in 1957

"None of them can hit quite as hard as Crawford. He stands up at the plate like a brick house and he hits all the pitchers, without playing favorites. - Fielder Jones

"...Christy Mathewson, when asked who was the hardest hitter he ever saw, promptly answered 'Sam Crawford' and Larry Doyle when broached on the same question replied as promptly 'Sam Crawford'." - Baseball Magazine, 1916

"Sam Crawford was for years considered the heaviest slugger in baseball. His great shoulders and muscular arms and his sure eye made him about the hardest man in the game for a pitcher to face..." - Baseball Magazine, 1913 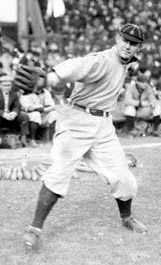 Sam Crawford played 19 seasons in the major leagues. Even having retired over 100 years ago, he still holds the record for most career triples (309), one that is not likely to be threatened anytime soon. He was a huge star in his heyday - near the end of his career, when he was sitting on the bench, Baseball Magazine took a photo of Crawford with the caption "Sam Crawford, Baseball's Greatest Slugger, at Present on the Bench". It took another Hall of Famer, Harry Heilmann, to sit Crawford down. In 1957, Crawford finally took his place among the elite in Cooperstown.

Nicknamed "Wahoo Sam" after his hometown of Wahoo, NE, Crawford was a high school football and baseball star. He played for a Wahoo traveling team, the crew traveling by wagon from town to town and taking on all comers. In 1899, he leapt at the opportunity to play pro ball, giving up a job as a barber's apprentice that he would never return to. While he was playing with two minor league clubs that year, the Cincinnati Reds moved in quickly, purchasing Sam from the Grand Rapids Prodigals of the Western League in September. Just a 19-year-old pup, one year removed from semipro travel ball, he hit .307/.318/.465 with 25 runs scored in 31 games. He began his barrage of triples in 1900, with 15 in 101 games, paired with a .260/.314/.429 batting line.

With the American and National League now in an all-out war for the top players in the land, Sam took the opportunity to wet his beak. He signed competing deals with the Cincinnati Reds and Detroit Tigers for the 1903 season which led to a legal dispute that needed to be resolved. A judge decided that "Wahoo" Sam was now the property of the Tigers. He would spend the next fifteen seasons in the Motor City.

Now an AL star, Sam made a wonderful debut in his new digs, leading the league in triples (25) while batting .335/.366/.489 with 88 runs scored in 1903. He was the Tigers' best player, hands down, in his first three seasons, routinely among league leaders even if his batting line slipped in 1904 and 1905. Towards the end of that 1905 season, he was joined in the outfield by a young man named Ty Cobb, who would be the one man to dim Sam's star somewhat. The pair did not get along off the field, but in Sam's defense, Ty did not get along with many men throughout his illustrious career. For a time, they only talked to each other when calling for a fly ball in the outfield.

In his career, "Wahoo" Sam batted .309/.362/.452 with 458 doubles, 309 triples and 97 home runs. He scored 1,391 runs and stole 367 bases in 2,517 games. Altogether, he was worth 75.3 bWAR and 71.1 fWAR. Crawford never led the league in batting, but he did finish second four different times. He also never led the league in slugging, but was second four times and third four other times. He was the first man to have led both leagues in home runs and had 51 inside-the-parkers, second most all-time. He ranks 9th on the all-time list for the Gray Ink test, which measures how often a player is among league leaders offensively.

Following his big league heave-ho, Sam played four more seasons, 1918 to 1921, with the Los Angeles Angels of the Pacific Coast League. At 40, he even led the PCL with 21 triples. He settled in southern California, becoming the head coach at USC from 1924 to 1929. Showing that art imitates life, he had a role in the 1927 Buster Keaton movie College, in which he played a baseball coach. He gave umpiring a shot from 1935 to 1938 in the PCL and found that he loathed the work. Upon leaving baseball, he became a bit of a recluse. When reporters showed up at his small cabin to congratulate him on his Hall of Fame induction in 1957, his neighbors had not even been aware he had played baseball, as he had never bothered to mention it. Sam was later honored by the Tigers (his name among their retired numbers) and the Reds (entrance into the team Hall of Fame in 1968). He was featured prominently in Lawrence Ritter's The Glory of Their Times, passing away two years after publication (1968) following a stroke.

"When I kick off they'll say, 'Well, good old Sam, he wasn't such a bad guy after all. Everything considered, he was pretty fair and square. We'll miss him.'" - Sam Crawford, on how he would like to be remembered, The Glory of Their Times