Inducted into Hall of Fame in 1952 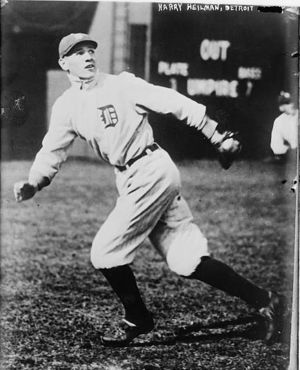 "People nowadays just don't realize how great a hitter Harry was. Next to Rogers Hornsby, he was the best righthanded hitter of them all." - Ty Cobb

Harry Heilmann was a Hall of Fame outfielder for the Detroit Tigers, a high average run producer who combined with legendary Ty Cobb to tear up American League pitching in the 1920s. When the two were joined by Heinie Manush in 1923, the Bengals fielded an all-Cooperstown trio in right, center, and left.

Born in San Francisco, CA, Heilmann played at Portland and San Francisco of the Pacific Coast League, before joining the Detroit Tigers for half a season as a 19 year-old in 1914. After another year of seasoning he established himself full time in the Detroit outfield in 1916. When Ty Cobb became player-manager in 1921 he began mentoring Heilmann's hitting. Heilmann's batting average jumped 85 points, soaring to a rarefied .394 and the first of what would be four batting titles. Cobb's reward? He finished as bridesmaid, nipping at Heilmann's heels at .389 (and never won another batting crown after copping a record twelve over the previous fourteen years).

Nicknamed "Slug", Heilmann emerged into an outstanding hitter, batting over .400 in 1923 and carrying a lifetime batting average of .342, #12 all-time. He strung together twelve consecutive seasons of hitting at least .300, and was in the top ten in batting average ten times. Eight times in nine years he knocked in over 100 runs, peaking at 139 in 1921.

Heilmann was still going strong at 35 when he was sold to the Cincinnati Reds in 1930, rapping 19 homers, plating 91, and hitting a round .333 before arthritis in his wrists forced him to miss the entire 1931 season. He returned briefly in 1932; completely unable to swing the lumber he retired after just 31 final at-bats. After spending the rest the season on the Reds coaching staff he launched a long and successful career as a Tiger broadcaster, working as a play-by-play announcer on the team's radio broadcasts from 1934 to 1950 and later adding TV. During World War II, he traveled overseas as part of a baseball group entertaining troops.

In his sole full season in Cincinnati, Heilmann became the first player to hit a home run in every major league park played in during his career, racking up four-sackers as he made the rounds of the National League to go along with a complete set in the AL. He held the Major League record of 134 hits on the road in 1925 until Ichiro Suzuki passed it in 2004 with 145.

A San Francisco native, Heilmann became famous throughout Detroit after saving a woman from drowning in the Detroit River in July 1916 during his sophomore season. He died of lung cancer at 56 in Southfield, MI in 1951, and was elected to the Hall of Fame in 1952, posthumously with Paul Waner. In 1999, he ranked Number 54 on The Sporting News' list of the 100 Greatest Baseball Players, and was nominated as a finalist for the Major League Baseball All-Century Team.

One of the most famous pictures of Heilmann is actually not of him but of Tigers teammate Larry Woodall. The picture, taken in 1923, somehow was mislabeled in the Associated Press's image files, and then was used to illustrate a Heilmann baseball card issued by Fleer in 1960 in a set depicting old-time ballplayers. It was later used on a number of other trading cards and on web sites (including for a time on Baseball-Reference.com). The two men do not actually look very similar, but since few people remembered what Heilmann looked like by the time the picture began to be widely used, the error went uncorrected until the early 2010s.

Some or all content from this article is licensed under the GNU Free Documentation License. It uses material from the Wikipedia article "Harry Heilmann".