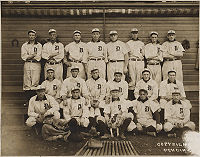 The 1907 Detroit Tigers won their first pennant in a very tight race that went down to the wire. The defending American League champions, the Chicago White Sox led the race early on, having built a 5 1/2 game lead over the second-place Cleveland Naps, with the Tigers a distant third. However, the White Sox collapsed after that, and by the start of September, Detroit was in first place in a tight four-team race. It was the Philadelphia Athletics who would prove to be their toughest opponent. The A's took a slim lead in the pennant race on September 4th, and managed to hold on to it until Detroit re-passed them on September 20th. On September 27th, at the start of a three-game series between the two teams, Detroit held a half-game lead despite having a lower winning percentage than the A's, due to a difference in the number of games played.

The Tigers won the opener of the three-game series behind the pitching of their ace, Wild Bill Donovan, who would win 25 games that season. The second game, scheduled for the Saturday, was rained out, and because Pennsylvania did not allow Sunday baseball, a doubleheader was scheduled for the Monday, September 30th. An overflow crowd of 25,000 packed Columbia Park for the occasion, and got treated to the most memorable game of the season. The A's took an early 7-1 lead against Donovan, but Rube Waddell was unable to hold it as the Tigers scored 4 times in the 7th, and three times in the next two innings, including a two-run homer by Ty Cobb off Waddell in the 9th, to force extra innings. Both teams scored once in the 11th to make it 9-9, and then a very controversial decision deprived Philadelphia of the likely winning run in the bottom of the 14th. Harry Davis had a double taken away when umpires Silk O'Loughlin and Tom Connolly ruled fan interference on a ball which CF Sam Crawford failed to catch at the edge of the rope-off crowd in the outfield. Danny Murphy followed with a single which would have ended the game had Davis been on second base, but instead the game continued for three more innings without any scoring before it was called due to darkness and ruled a tie; the second game was never played. The Tigers then clinched the pennant by sweeping a four-game series against the last-place Washington Senators, and then following that by winning one of three against the seventh-place St. Louis Browns. Because the Athletics also lost twice during that stretch, the Tigers won the pennant in spite of losing one more game than Philadelphia, finish with a record of 92-58 while the A's went 88-57.

The key to the Tigers' pennant win was their fabulous outfield of Cobb, Crawford and Davy Jones. Crawford had 102 runs scored to lead the American League, followed by Jones with 101 and Cobb with 99; the next man on the leadership board was Philadelphia's Topsy Hartsel, with 93. Cobb led the league in batting average, slugging percentage, OPS, hits, total bases, RBIs and stolen bases, in what was the first great season of his superlative career. For all that, however, the Tigers were swept by the Chicago Cubs in the 1907 World Series, four games to none with Game 1 ending up in a tie.