Danny Murphy, a second baseman early in his career and an outfielder later in his career, was a 16-year major leaguer who played mostly with the Philadelphia Athletics of Connie Mack. They won the World Series three times and the pennant two other times while he was with them. He was part of what was called the $100,000 infield, until he was moved to the outfield so Eddie Collins could play second base. 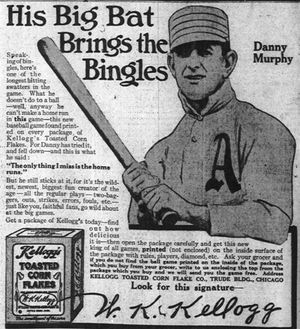 He appeared in the 1910 World Series, hitting .400 on the winning team. Again, he batted sixth in the lineup, with Eddie Collins batting third and Home Run Baker batting cleanup. In 1911, the Athletics again won the World Series, and Murphy batted .327. This time, he was fifth in the batting order, as he and Harry Davis changed spots.

He finished out his career with a couple of years on the Brooklyn team of the Federal League, first hitting .304 in 52 games in 1914 at the age of 37, and then appearing in 5 games the next year.

He managed the New Haven Murlins from 1916-18, winning the Eastern League championship in 1917. The league disbanded during the 1918 season. In 1919, when play resumed, the New Haven entry was called the "Weissmen." Murphy finished the season as the team's manager.

After his playing career ended, Danny Murphy was a Philadelphia Athletics coach from 1920 to 1924 and a member of the Philadelphia Phillies staff in 1927.