Note: This page links to George Davis, the Hall of Fame infielder. For the major league pitcher who played from 1912 to 1915, click here; for the outfielder better known as "Kiddo" Davis, click here.

George Davis was belatedly added to the Hall of Fame many decades after he died. A top shortstop during his era, his talents were forgotten until many years later. Hall of Fame historian Lee Allen spearheaded a search for Davis around 1955, because no one knew what had happened to him. Bill James described both the search for Davis and Davis' later life in The Politics of Glory, a book which helped provide the final push for Davis's enshrinement in Cooperstown.

Davis had a 20-year playing career split between the high-average 1890s and the low-average 1900s. He usually hit well over .300 in the 1890s and between .250 and .280 in the 1900s, and his Adjusted OPS was 121 for his career. He had unusual power for a shortstop, and along with a lot of stolen bases, he was able to drive in and score a high number of runs for a shortstop. Also unusual, he moved against the normal defensive spectrum during his career, starting as a corner outfielder and ending up in a much more challenging defensive position (almost all players start out playing more demanding position and eventually move to easier ones as they age, but Davis did the opposite). 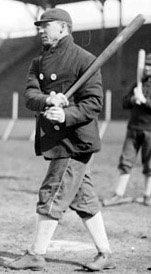 Davis became a switch-hitter in his youth (Bill James called him the best switch-hitter in the majors in the 1890s). He started playing semi-pro ball in 1889 and came to the majors in 1890. During the first part of his major league career, he spent three years with the Cleveland Spiders and then was the mainstay of the New York Giants lineup from 1893 to 1901, usually having the highest batting average on the team. Late in his career, he was a star for seven years for the Chicago White Sox, and played on the 1906 Chicago White Sox team which not only won the pennant but went on to defeat the heavily-favored Chicago Cubs team in the World Series.

In 1903, after spending all of 1902 with the White Sox, he played a few games with the Giants, but was the subject of a raging dispute between the National League and the young American League over who owned his playing rights and ended up sitting out most of the season. The dispute was finally resolved in favor of the White Sox, to whom he returned in 1904.

Based on the similarity scores method, seven of the ten most similar players are Hall of Famers. The most similar player is Hall of Famer Frankie Frisch, although Frisch played his entire career in a lively-ball era, while Davis played half of his in a dead-ball era. Roberto Alomar is also on the list, and is a fairly good modern-day comparison, except that while Frisch and Alomar were fiery players, Davis was a gentleman known for his cool temper.

Davis was once credited in the newspaper with saving the lives of some kids trapped in a burning building. He was on the way to a ball game at the time, and after saving the kids, he continued on to play the game.

He managed for parts of three years, and might have managed longer but for flighty New York Giants owner John Brush who fired him. Bill James' account of his life gives an in-depth look at the indignities he suffered while managing the Giants. He managed one season in the minors and coached Amherst College from 1913 to 1918 before disappearing from view.

In 1893, he was accused by a former amateur ballplayer from Cleveland, one Harrison Campbell, of having eloped with his wife Flora. The story made the news for a day or two then disappeared, but eight years later, Campbell brought it up again when he was suing for divorce from his wife. Davis denied the claims again, but it is clear that the had been something going on between the two and that it served as a convenient excuse for Campbell, who badly wanted a divorce. A couple of years later, Davis was accused of having simultaneously promised marriage to two New York women (with no intention of carrying through). That story also blew over quickly. Then, in a rather unconventional arrangement for the time, Davis and his spouse Jane Holden were living as man and wife starting in 1898 while not actually married (a formal wedding took place only in 1904, and very quietly at that). Later research found that he was admitted to Philadelphia General Hospital in 1934 and was later transferred to a mental institution where he remained until his death in 1940. He was suffering from insanity and dementia produced by syphilitic alteration of the brain. His wife survived him by eight years.

Note- According to Baseball-reference.com, Davis hit .355 in 1893 and would therefore not hold the switch hitters' record for BA.