"That Frisch was a sassy kid . . . but he had a lot of guts. . . I'd try to drive him back but he'd still lean in there and hit me to left field. - Hall of Famer Burleigh Grimes, about pitching to Frankie Frisch

Francis "Frankie" Frisch began his career after graduating from Fordham University, where he had starred in four sports. It was there that Frisch earned his nickname "The Fordham Flash."

After graduation, Frisch signed with the New York Giants of the National League, moving directly to the majors in 1919 without playing in the minor leagues. He made an immediate impact, finishing 3rd in the NL in stolen bases and 7th in RBI in 1920, his first full season. Manager John McGraw was so taken with Frisch's attitude that he soon named him team captain, giving him advice in baserunning and hitting. The Giants played Frisch at both third base and second base early in his career, but by 1923 he was installed as the team's full-time second baseman.

Frisch was an excellent hitter, having batted over .300 in his last six seasons with New York. He was also an expert fielder and a skilled baserunner. In 1921, he led the National League with 48 steals, in 1923 in hits, and in 1924 in runs. With Frisch adding his fiery competitiveness to the team, the Giants won the World Series in 1921 and 1922, winning the NL pennant the following two seasons as well.

After the 1926 season, Frisch was traded - with pitcher Jimmy Ring - to the St. Louis Cardinals in exchange for star 2B Rogers Hornsby. After an August loss in which Frisch had missed a sign, costing the Giants a run, McGraw had loudly berated Frisch in front of the team; Frisch responded by leaving the team, and his previously close relationship with McGraw was virtually over, leading to the trade.

Playing second base for the Cardinals, Frisch appeared in four more World Series (1928, 1930, 1931 and1934), bringing his career total to eight. He was the driving force of the "Gas House Gang", the nickname for the Cardinals clubs of the early 1930s which were built around him to reflect his no-holds-barred approach. The Cardinals had won only one pennant before Frisch joined the team; the Giants would win the pennant only once in Frisch's nine seasons as the Cards' regular second baseman. Perhaps his most impressive feat in St. Louis was winning over the fans in the wake of the Hornsby trade; his ability to consistently hit over .300, along with his defense and baserunning - both substantially better than Hornsby's - were significant factors in his favor. 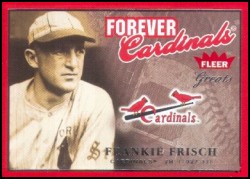 Frisch played 11 seasons with the Cardinals. In 1931 he was voted the Most Valuable Player in the National League after batting .311 with 10 home runs and 114 RBI. The 1931 Cardinals also triumphed in the World Series, defeating Connie Mack's defending two-time champion Philadelphia Athletics in seven games.

Frisch became player-manager of the Cardinals in 1933, taking over for Gabby Street, and was named to the NL's first three All-Star teams from 1933 to 1935. In 1934, he managed the Cardinals to another seven-game World Series victory - this time over the Detroit Tigers.

Frankie Frisch was elected to the Hall of Fame in 1947. After no players had been selected by the writers in the previous two years (the only elections since Hornsby's selection in 1942), the rules were revised to limit eligibility to those players who had retired after 1921; Frisch was among the first four players to benefit from the more reasonable field of candidates.

After retirement, he continued to manage the Cardinals but he was never able to capture another pennant. Frisch also had managerial stints with the Pittsburgh Pirates (1940-1946) and Chicago Cubs (1949-1951), but without the success he had in St. Louis. Frisch's career ledger as a manager shows a 1138-1078 mark including the sole pennant in 1934.

For a few years in the 1950s, he worked as a radio play-by-play announcer and coach for the New York Giants. His broadcasting trademark was worrying about pitchers walking batters: "Oh, those bases on balls!" A heart attack in 1956 forced him to curtail his activities. For many years, he lived at 184 Fenimore Road in the Bonnie Crest neighborhood of New Rochelle, NY. He had two hounds named "Flash" and "Patches" who kept him company. Frisch eventually moved to Westerly, RI, devoting himself mainly to his interests in gardening and classical music.

A number of years after Frisch left the playing field as a manager, he became a member of the Hall of Fame's Committee on Baseball Veterans, which was responsible for electing players to the Hall of Fame who may have been overlooked in initial balloting by the Baseball Writers; he later became chairman of this powerful committee. In the years just prior to his death, a number of Frisch's Giants and Cardinals teammates were elected to the Hall; some notable writers, chiefly among them Bill James, have criticized these selections - including Jesse Haines, Dave Bancroft, Chick Hafey, Rube Marquard, Ross Youngs and George Kelly - which include some of the most widely-questioned honorees in the Hall's history. Critics have complained that many of these selectees had accomplishments which were less outstanding than those of other players who were bypassed, and were only selected because of Frisch's influence.

Frankie Frisch died in Wilmington, DE on March 12, 1973, from injuries suffered from a car accident near Elkton, MD one month earlier. He was 74 years old. Frisch had been heading home to Rhode Island from the meeting of the Veterans' Committee in Florida when he lost control of his car. He is interred at Woodlawn Cemetery in the Bronx.

In 1999, he ranked number 88 on The Sporting News list of the 100 Greatest Baseball Players, and was a nominee for the Major League Baseball All-Century Team.

"Kiner looks like he's going to be the best [outfielder] we've ever had." - Pirate manager Frankie Frisch in 1946, perceptively appraising prospect Ralph Kiner before Kiner ever played a major league game

Some or all content from this article is licensed under the GNU Free Documentation License. It uses material from the Wikipedia article "Frankie Frisch".