". . . the greatest shortstop the Giants ever had and one of the greatest that ever lived." - sportswriter and J.G. Taylor Spink Award winner Frank Graham

". . . known for his intelligence on the field and his fiery leadership in the dugout . . . Bancroft is still considered to be among the top fielders in baseball history." - from Dave Bancroft's Hall of Fame website

Hall of Famer Dave Bancroft was a spark plug and team captain of the great New York Giants teams that won the pennant each year from 1921-1923. His assist and putout totals during the early 1920s are some of the highest of all time, and he was the first shortstop to turn 100 double plays in a season. While his batting was not as impressive as his fielding, his career Adjusted OPS+ is better than Hall of Fame shortstops Joe Tinker, Rabbit Maranville, Phil Rizzuto, Luis Aparicio, Ozzie Smith and John Ward, and he had more hits than Hall of Fame shortstops Lou Boudreau and Travis Jackson.

Bancroft was a career .279 hitter, and never hit more than seven home runs or drove in more than 67 runs in a season. His biggest accomplishments were his postseason success as a member of the 1921 and 1922 World Series champion Giants teams. He set a major league single-season record in 1922 by handling 984 total chances at shortstop. He was, in fact, a very fine defensive player who led National League shortstops four times in putouts. He was also very durable, playing over 100 games in 13 seasons, including a league-leading 156 in 1922.

Bancroft later managed three seasons in the minors. Additionally, he managed the Chicago Colleens in the All-American Girls Professional Baseball League in 1948 and the 1949-1950 South Bend Blue Sox. 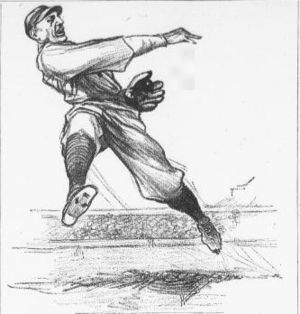 Bancroft making a "sensational stop and throw" off Boston's Sherry Magee in 1915.

Bancroft was elected into the Baseball Hall of Fame on January 31, 1971 by the Veterans Committee. He is considered one of the most controversial players in the Hall, with many attributing his election to the presence of cronies on the Veterans Committee, notably former Giants teammate Frankie Frisch, rather than his baseball achievements. Most players with similar statistics do not have much of a chance of being elected to the Hall of Fame.

That is just one side of the argument, though. The other side of the argument is that Bancroft was the Ozzie Smith of his era - except he was Ozzie's equal in fielding but a better hitter. While Ozzie's record-setting assist total in 1980 (in 158 games) beat anything Bancroft (or anyone else) accomplished, Bancroft's assist totals in 1920 and 1922 both beat Ozzie's second-best season. And Bancroft's third-best is almost exactly the same as Ozzie's third-best season. As far as hitting, Bancroft's best single-season Adjusted OPS+ of 120 easily beats Ozzie's best of 112, and Bancroft's lifetime Adjusted OPS+ bests the lifetime score of several shortstop Hall of Famers such as Ozzie, Joe Tinker, Rabbit Maranville, Luis Aparicio, Phil Rizzuto and John Ward, not to mention defensive whiz and Hall of Fame second baseman Bill Mazeroski. And, Bancroft's score is only one point short of Hall of Fame shortstop Pee Wee Reese's score.

Some or all content from this article is licensed under the GNU Free Documentation License. It uses material from the Wikipedia article "Dave Bancroft". Some of this material is not from Wikipedia.