Note: This page links to Hall of Fame pitcher/infielder John Montgomery Ward. For others with the same name, click here.

"John M. Ward was the star pitcher of the country . . . when he turned his attention to playing other positions, as his arm was not strong enough to stand the strain." - Tim Murnane's comment on Ward's career

John Montgomery Ward (March 3, 1860 – March 4, 1925) was a 19th Century star pitcher, shortstop, manager, general manager, and attorney. As an attorney, he was involved in some of the legal controversies of the time. While later baseball histories call him Monte frequently, he was not known by that name when he played. This appears to be an error on the part of historians.

Ward was a pitcher and outfielder for his first 7 seasons and then played 11 years as a shortstop and second baseman. He also acted as player-manager and was a leader of the 1879 pennant winning Providence Grays, posting 47 victories as a 19-year-old pitcher. Ward, together with Ned Hanlon, formed the first baseball players union, The Brotherhood of Professional Baseball Players, in 1885, successfully challenging the player reserve clause. He also was one of the leads in forming a new baseball league - the Players League - which lasted one year. Throughout his career, Ward played with many of the legendary 19th century ballplayers including Charles Radbourn, Roger Connor, Buck Ewing, James "Tip" O'Neill and Dave Orr. 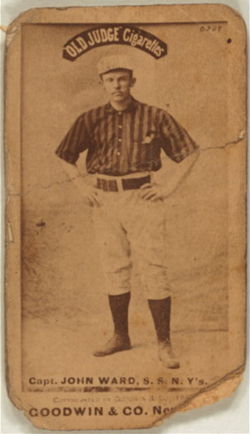 Ward moved to the New York Gothams (renamed the Giants in 1885) in 1883, completed his transition from a pitcher to an everyday player in 1884, and became the everyday shortstop in 1885. Ward played for the Brooklyn Ward's Wonders in 1890 in the short-lived Players League before returning to the National League to play for the Brooklyn Grooms in 1891 and 1892. Ward finished his career after playing the 1893 and 1894 seasons with the New York Giants. He accumulated 1408 runs, 26 home runs, 867 RBI and a .275 batting average, including three seasons batting over .300.

One interesting fact of Ward's career was he pitched the second perfect game in baseball history, both occurring within a six-day period. Pitching for Providence against the Buffalo Bisons on June 17, 1880, Ward retired 27 batters in a row, striking out two, and won, 5-0. Lee Richmond had thrown baseball's first perfect game just five days before, on June 12th. The next perfect game by a National League pitcher wouldn't happen for 84 years, when Jim Bunning pitched a perfect game on Father's Day in 1964.

In the 1880s he was married for a spell with Helen Dauvray, one of the leading stage actresses of the time. His teammate Tim Keefe married Helen's sister, thus the two were brothers-in-law. Keefe served as his deputy in the Brotherhood from 1885 to 1890, as the Association's secretary while Ward was President. In 1907, Ward was noted for having a beautiful country home in Babylon, NY and "is attaining fame as one of the leading golfers of the United States" per this article. He was listed as being well-to-do and prosperous at the time.

Ward retired from baseball at age 34 in order to enter the legal profession. As a successful lawyer he represented baseball players against the National League. Later he was part owner (with James E. Gaffney) and team president of the Boston Braves franchise in 1911-1912. He then became an official in the short-lived Federal League in 1914.

He was elected to the Baseball Hall of Fame by the Committee on Baseball Veterans in 1964.

Some or all content from this article is licensed under the GNU Free Documentation License. It uses material from the Wikipedia article "John Ward".