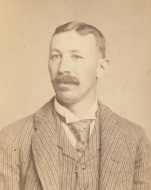 "I have never seen anyone throw like him since I have been in baseball." - Tom Loftus, 1889, Cleveland manager

"In his prime the greatest player of the game from the standpoint of supreme excellence in all departments: batting, catching, fielding, base running, throwing and baseball brains. A player without a weakness of any kind." - Reach Guide, 1919

Buck Ewing was one of the biggest stars in 19th century baseball, and an argument could be made that he was the greatest catcher of all time. Similarity scores show that two of the three most similar players are King Kelly and Hughie Jennings, although no player is truly similar.

After playing top amateur ball in Cincinnati, OH in the late 1870s, he broke in with the 1880 Troy Trojans, at a time when professional major-league baseball was starting its first "golden age", and lasted until 1897. Hall of Famers Dan Brouthers and Roger Connor were also young players on the Troy team. He suffered an injury to his throwing arm in 1892, and thereafter his arm was never the same.

His career stats, while very good, are not mind-boggling. In an 18-year-career, he usually hit over .300, and ended up with a .303 career average. He led the league in home runs once (at the time, his 10 home runs was a record), and in triples once, and was usually in the top ten in slugging. He stole a great many bases (statistics are not complete for the early years of his career, but he stole 354 bases from 1886 onward).

Where, then, is the argument for his being the greatest catcher of all time? First, it is said that he reinvented the art of catching, playing much closer to the batter and sometimes crouching. His arm was strong enough that he could afford to do so.

Secondly, it was an era in which catchers took a beating from stray balls. Without modern equipment to protect them, catchers tended to get injuries and miss a large proportion of their teams' games. As a result, the players who ended up at catcher were usually poor hitters: for instance, in 1883 when Ewing hit .303 and led the league in homers for Troy, other catchers in the league had these stats: Doc Bushong (Cleveland, .172, 0 homers), Barney Gilligan (Providence, .198, 0 homers), Silver Flint (Chicago, .265, 0 homers), Mike Hines (Boston, .225, 0 homers), Jack Rowe (Buffalo, .278, 1 home run); there were a couple of catchers in the league who also hit .300 that year (Charlie Bennett and Emil Gross), but neither was able to duplicate the feat year after year, as Ewing did - Gross played only 5 seasons, while Bennett ended up with a lifetime .256 average. Ewing played in more games in 1883 than any catcher in the league but Bennett, and had more at-bats than Bennett. 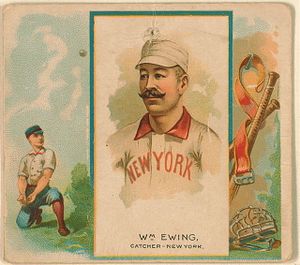 So Ewing was a "freak" - a catcher who could not only hit as well as King Kelly, but did so at a time when other catchers were often hitting close to .200 without power. And he kept it up for a long career (Kelly himself, who was a contemporary of Ewing, played more outfield than catcher and wasn't primarily a catcher until late in his career).

Third, Buck was an all-around player, with high average, good power, lots of stolen bases, and great fielding. Although a catcher, one could think of him as the Tris Speaker or Willie Mays of his time. In post-season play, his team twice won the Temple Cup, the 19th century semi-equivalent of the World Series.

He didn't always play catcher, of course, because his bat was too valuable to sit on the bench if he could play elsewhere. So he was a useful multi-position player, appearing in 636 games at catcher, 253 at first base, 235 in the outfield, 127 at third base, 51 games at second base, 34 games at shortstop, and 9 as a pitcher (his ERA in 47 innings was 3.45, better than the average pitcher). He also umpired two games in the American Association in 1882.

The argument for seeing him as the greatest catcher of all time rests on the view that he was head-and-shoulders above the other catchers of his time, and on top of that was an all-around player. Being a catcher who hit .300 in an era when other catchers tended to hit around .200 was equivalent to being Mike Piazza in the 1990s, only imagine Piazza as a perennial Gold Glove catcher who stole 50 bases each year and got lots of triples in addition to his home runs and high average.

Ewing managed for 7 seasons, during 4 of which he was a player-manager. His lifetime winning percentage as a manager was .553. Six of his seven teams finished over .500. Wahoo Sam Crawford broke in as a 19-year-old rookie under Ewing in 1899, as did Harry Steinfeldt, who was later to become so valuable on the 1906 Cubs team that went 116-36. Hall of Famers who played several years for Ewing included Jake Beckley and Bid McPhee. When Ewing's New York Giants started out very slowly in 1900, he was replaced by team shortstop and eventual Hall of Famer George Davis as manager.

The book The Cincinnati Reds by Lee Allen has a chapter on Ewing's years as manager of the Reds.

Ewing died young, a few days after his 47th birthday. His New York Times obituary says that he was well-to-do at the time of his death, owning considerable property.

His brother John Ewing led the National League in ERA in 1891. His nephew Bob Ewing won over 100 games in the majors.

Ewing had 178 career triples, a record for players whose main position was catcher. Duke Farrell is second with 123.