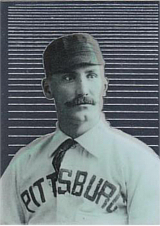 "He had the record for games played by a first baseman with 2,368 until Eddie Murray broke it in 1994, but still has more career putouts and total chances of anyone in history. He even once hit three homers in a game in 1897 for the Cincinnati Reds, a feat no one duplicated until Ken Williams in 1922." - from an article in USA Today, March 8, 2016, about Jake Beckley

First baseman Jake Beckley played two decades in the majors. Known as a good hitter with speed, he was inducted into the Hall of Fame in 1971.

Beckley began his pro career with the Leavenworth Soldiers of the Western League in 1886. He reached the majors in 1888, when the Pittsburgh Alleghenys of the National League purchased his contract from the St. Louis Whites of the Western Association for $2,500. In 71 games with the team that year, he hit .343. In 1890, he jumped to the Pittsburgh Burghers of the upstart Players League along with several teammates, and he tied teammate Joe Visner for the league lead with 22 triples. The circuit folded after one season, and he returned to the NL squad, now known as the Pirates. He scored over 100 runs in each season from 1892 to 1895 and drove in more than 100 runs three times during that span. Beckley was traded to the New York Giants during the 1896 season and moved on to the Cincinnati Reds about a year later. In seven seasons with the Reds, he hit over .300 six times. His contract was purchased by the St. Louis Cardinals prior to the 1904 season and he spent his final four years in the big leagues with the club. Following his major league days, he played and managed in the minors for several summers. He also umpired in one National League game in 1906 and was an umpire in the minor league Federal League in 1913. He also coached at William Jewell College.

Beckley is 48th on the all-time list for runs scored, 38th for hits, 4th for triples, and 45th for RBI (as of 2019). Based on Adjusted OPS+, his best year was his rookie season, at age 20. Although he hardly ever led the league in batting categories, he was frequently among the leaders as his Gray Ink score of 165 shows. The nine players most similar to him (based on the similarity scores method) are all in the Hall of Fame.

Jake passed away at just 50 of heart disease in 1918. He was elected to the Hall on January 31, 1971, by the Committee on Baseball Veterans. He is also a member of the Pittsburgh Pirates and Cincinnati Reds team Hall of Fames. In 2016, the Hannibal Cavemen (in his hometown in Missouri) of the Prospect League installed the Jake Beckley .308 Gate at their ballpark, Clemens Field, commemorating his big league batting average.

"Jake Stenzel denies the charge that he, Beckley and Smith are killers. He says that this impression is the outgrowth of the fact that he and his associates do not play parlor ball, but are out to win all the time." - Sporting Life, November 30, 1895